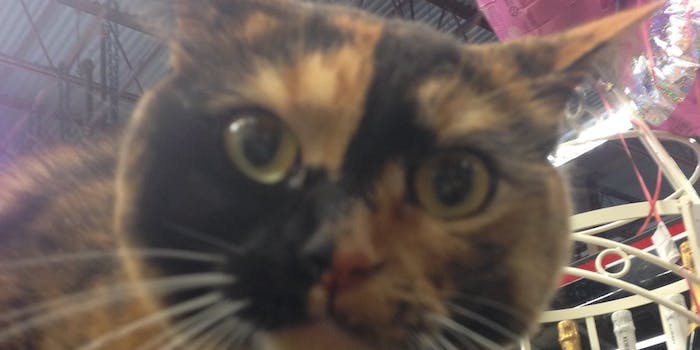 Was this all a really weird ploy to keep the #WhoDatCat in the news?

A cat that may have won the New Orleans Saints their game against arch rivals the Atlanta Falcons has been found after going missing this weekend. Zoey, a black and gold (well, orange) calico with gold eyes and a penchant for football, escaped from her carrier at Uncle Bob’s Storage just across the river from the Mercedes-Benz Superdome on Thursday.

It’s within the dome that Zoey became famous for basically being a cat that attended a sporting event. Saints fans are the type of superstitious to light votives for the team. Needless to say, fans started freaking out.

The entire city of New Orleans—nay, the entire state of Louisiana—banded together to find the #WhoDatCat. She was somehow lured with biscuits, found by a stranger, and returned to owner Randall James Pumilia on Tuesday night. The whole story is a little bit fishy given the push to get Zoey famous. Apparently she’s going to be on the Ellen DeGeneres show, according to Pumilia. Oh, and now she’s doing meet-and-greet appearances.

Was this all a really weird ploy to keep the #WhoDatCat in the news? It’s not like Zoey has been drafted into the NFL or anything. Can you really say a cat won you an extra football game when she clearly wasn’t in Indianapolis for the game that followed the Saints’ victory against the Falcons? Nobody seems to know or care so long as the Saints keep winning. #WhoDatCat indeed.