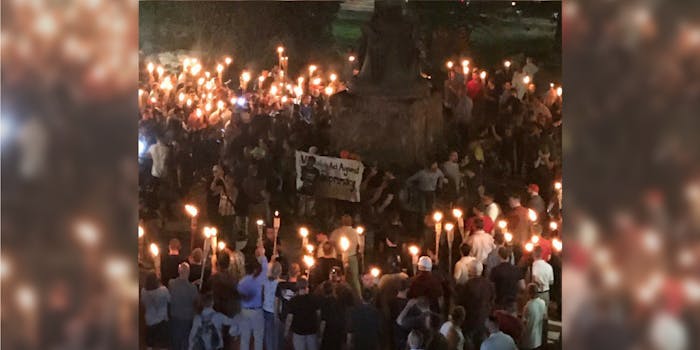 More than any other group combined.

White supremacist murders more than doubled in 2017 and surpassed those committed by domestic Islamic extremists, according to data analyzed by the Anti-Defamation League’s Center on Extremism.

The ADL published its findings on Wednesday, which show that right-wing extremism, which includes the “alt-right” and white supremacists, were responsible 20 out of 34 extremist-related deaths in last year.

“When white supremacists and other extremists are emboldened and find new audiences for their hate-filled views, violence is usually not far behind,” said Jonathan A. Greenblatt, the CEO of the ADL. “We cannot ignore the fact that white supremacists are emboldened, and as a society we need to keep a close watch on recruitment and rallies such as Charlottesville, which have the greatest potential to provoke and inspire violence.”

Islamic extremism trailed behind the right-wing extremists with nine of the deaths, while left-wing extremism—like anarchists and Black nationalists—were responsible for seven.

Right-wing extremists were directly responsible for 20 of the total 34 extremist-related murders in 2017. For more facts on murder & extremism in the U.S., see the full report here: https://t.co/6mAComndPN @ADL_National pic.twitter.com/PIusGjUsqe

The ADL notes, however, that an Islamic extremist still committed the single deadliest incident in 2017, which was the New York City bike-path vehicular homicide attack that killed eight people in October.

The data also shows that murders committed by Black nationalists have risen, which prompts the ADL to view the movement as a “possible emerging extremist threat.”

Basically, all extremist activity increased last year, but it was the white nationalists and supremacists who were empowered the most, as their movement grew more comfortable expanding its operations from the internet shadows into the streets under Donald Trump’s presidency.

“These findings are a stark reminder that domestic extremism is a serious threat to our safety and security,” Greenblatt said. “We saw two car-ramming attacks in the U.S. last year—one from an Islamic terrorist and another from a white supremacist in Charlottesville—and the number of deaths attributed to white supremacists increased substantially. The bottom line is we cannot ignore one form of extremism over another. We must tackle them all.”