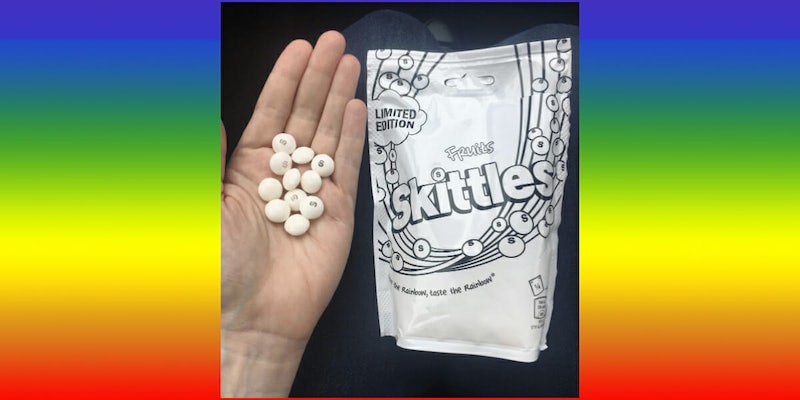 The brand wanted to express its solidarity with the LGBTQ community, but instead it's managed to infuriate others.

After two decades of thriving on the slogan “Taste the rainbow,” Skittles candies have ditched their signature rainbow look for a very special cause: Pride.

As the back of the limited-edition white Skittles bag explains, “During Pride, only one rainbow matters. So we’ve given up ours to show support.” They’re also prominently on display in the U.K.’s Tesco stores with the same message, including a line about donations made from sales proceeds being sent to LGBTQ charities.

This white-out only removes the color, not the flavor: These candies are still fruit-flavored.

It’s not the first time Skittles has ditched the rainbow for Pride, having done a similar whiteout in 2016. While it has been mostly well received on social media, with purchasers delighted by the switch, others have taken issue with the brand’s decision, citing it as confusing and potentially racist.

im soooo over people making EVERYTHING about race, they can't even make white skittles without y'all reaching

To those concerned by those issues, rest easy: M&Ms are still available in their original colors, as are Skittles in most locations outside Tesco.