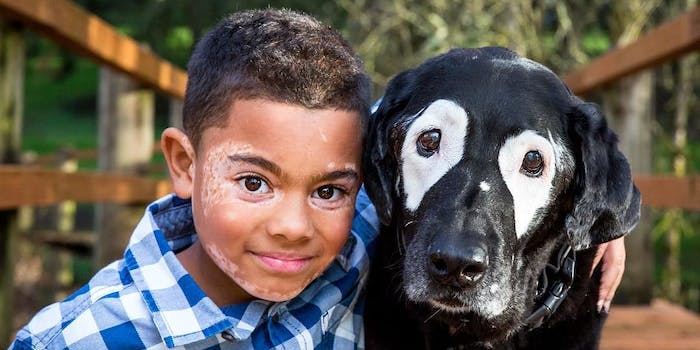 Rowdy has helped the 8-year-old feel better about his skin disease.

Months ago, an 8-year-old boy from Arkansas and a “white-eyed” labrador dog from Oregon connected on the internet over their shared skin condition—vitiligo. And on Saturday, the pair finally met in person thanks to the kindness of crowdfunders.

According to Rowdy’s owner, Niki Umbenhower, it was a dream come true.

Rowdy, who’s known to his 67,600 Instagram followers as “White Eyed Rowdy,” is nearly 14 years old, but wasn’t diagnosed with vitiligo, characterized by a loss of pigment on areas of the skin, until three years ago. Coincidentally enough, 8-year-old Carter was also diagnosed with the condition the same month and year, according to KATU, an Oregon ABC affiliate station.

Stephanie Adcock, Carter’s mom, told KATU that Carter struggled daily with each new spot on his face. But after finding pictures of Rowdy on Facebook, Carter’s outlook toward his skin changed dramatically.

“I used to pick up Carter from school from kindergarten and first grade, and the first thing he would say is that he hates his face and hates his skin,” Adcock said. “I read that Rowdy had vitiligo and I was blown away, and when I showed Carter he was so excited to see a dog that was famous for his vitiligo.”

On a joint GoFundMe campaign raising funds for Carter and a little girl named Ava who also has vitiligo to meet Rowdy, Adcock wrote that Carter’s confidence and attitude changed drastically after watching an Upworthy video that featured Rowdy and a photo of Carter.

“When I showed Carter the video, he broke out in the BIGGEST smile. ‘Me and Rowdy are famous!’ he said. For the first time in two years, Carter was PROUD of himself and his vitiligo. He even said, ‘Mom, your skin is boring because you don’t have vitiligo,'” Adcock wrote on the campaign.

Recruited as a mascot, this pup is doing what he can to help children with vitiligo fight low self-esteem and depression.

Though Rowdy is helping kids beyond Carter, his age has become some of an issue.

“I feel like he has so much more work to do, but his health is definitely more of a senior dog,” Umbenhower told KATU.

I met Jessica today. ❤She is a beautiful 11 year old who also has vitiligo. Those that look beyond her skin condition will see she has a huge heart, is very smart, and is one strong girl! We interviewed her for a YouTube video series we want to do and I cannot wait to share it with you all once we get it edited!! #vitiligo #vitiligoisbeautiful #nocuredontcare #dogswithjobs #vitiligonation #vitiligoworld #vitiligogirls #dog #mydogiscutest #dogstagram #dogsofig #dogsofpdx #dogsofinstagram #awareness #dogsofig #unique #beautiful #inspirational #keepportlandrowdy

UPDATE ON ROWDY . Rowdy saw a neurologist in the ER today. They are not sure if it was a seizure or a stroke or something else. They did a lot of tests and without a "much needed" (expensive) MRI and CT Scan, we may never know. He could have a tumor or a mass causing a lot of his issues. . We left with them prescribing a new medication for seizures as well as some codeine for his pain. This could be age related, an isolated event, or he may have more episodes like today. . I want to thank EACH AND EVERY ONE OF YOU for the prayers, well wishes, and support! It is truly overwhelming to see the kindness and love this pup has from around the world! We love you all! Please continue to follow along the amazing adventure we are having with Carter and his mom from Arkansas! While Rowdy started his day with a scare and a trip to the ER, he was able to end it meeting up with Carter, another beautiful little girl Emma from Eugene, and some dear family friends for a play date and then squeezed in a photo shoot to boot. . This dog never ceases to amaze me with his resilience!!

For the time remaining, however, Umbenhower wants to help other people struggling with their skin condition by making sure Rowdy is by their side, she told Inside Edition.

“He’s done a complete 180,” Adcock told the program about her son. “We’ve come full circle. He’s proud of himself. He thinks we have boring skin because we don’t get to have vitiligo.”