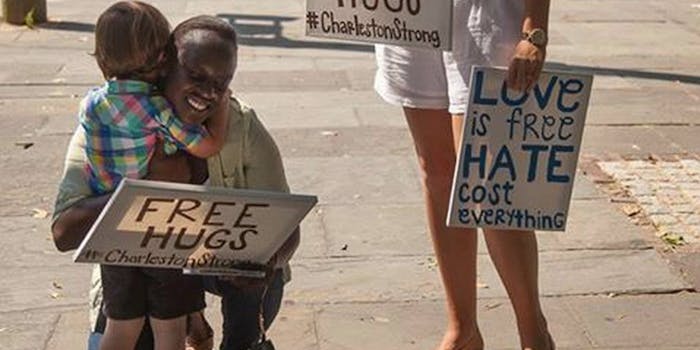 The story behind this Charleston photo is absolutely heartbreaking

A local photographer captured this powerful moment between his son and a total stranger.

A massacre carried out by a young white man at an historic black church in Charleston last Wednesday left nine people dead. But amid the chaos, sadness, and destruction comes an image that has brought some hope to a community in mourning.

Photographer John Nettles, Jr. was attending Charleston United, a prayer and worship gathering in honor of the massacre victims. Nettles and his family headed to the Emanuel A.M.E. Church for the event, where they spotted a young black woman named Taylor Willis and a friend holding signs that said “Free hugs #CharlestonStrong” and “Love is free, Hate costs everything.”

Nettles, who is white, approached the women to take their photo, when his three-year-old son, Parker, ran over for a free hug, Nettles told the Huffington Post. He was able to capture a candid photo of the powerful moment and later shared it on Facebook. 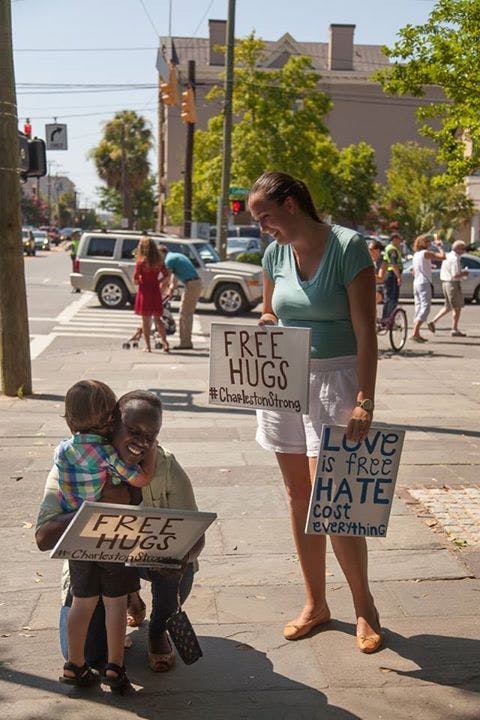 “This picture was hard to take and hard to edit…because Parker doesn’t understand how powerful that hug is. To him it’s just a hug,” Nettles wrote on Facebook.

He added: “It’s probably the most beautiful hug I’ve ever witnessed.”

The unimaginable violence that took place last week can be a difficult thing to explain to a three-year-old, but Nettles told the Huffington Post that he and his wife Lindsay are trying to explain what happened to Parker in a safe and meaningful way.

“We’ve been really reinforcing love and kindness with him throughout everything,” Nettles said. “He’s only 3 and doesn’t have a true understanding of death and especially not murder, but he does understand when something is done out of hate or to be mean. He really does have a gentle heart and, at least for now, love and kindness seem to come naturally to him.”