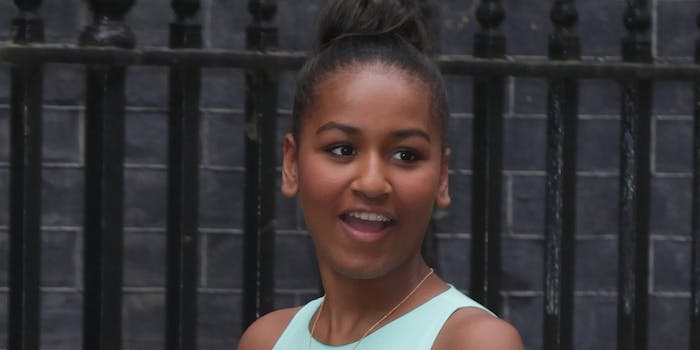 Even first daughters have exams.

President Obama tearfully thanked his family at end of his POTUS farewell speech Tuesday night, crediting them for their grace as they tackled eight years of being in the spotlight. But as First Lady Michelle and eldest daughter Malia wiped away their tears, the Twitterverse—and viewers everywhere—couldn’t help but notice that 15-year-old Sasha was missing from the front row.

“Malia and Sasha, under the strangest of circumstances, you have become two amazing young women, smart and beautiful, but more importantly, kind and thoughtful and full of passion,” Obama said. “You wore the burden of years in the spotlight so easily. Of all that I’ve done in my life, I’m most proud to be your dad.”

"Of all that I’ve done in my life, I’m most proud to be your dad." —@POTUS to Malia and Sasha #ObamaFarewell https://t.co/JLR06l27pJ

Sasha’s absence caused Twitter users to do what they do best: start a hashtag. With #wheressasha, viewers hypothesized why Sasha didn’t show.

"Sasha if you don't get in the helicopter we are leaving without you!" #obamafarewell #wheressasha

Turns out Sasha had a pretty regular reason to miss her father’s speech: school.

White House officials announced today that Sasha stayed in Washington because she had a science exam. One Twitter user shared a photo of midterm exam rules, which state “absence for travel is not an adequate reason to reschedule an exam.” Even the first daughter has to follow rules.

Omg Sasha has to take a damn science exam tomorrow this is NOT RIGHT pic.twitter.com/NWsLj2URfC

While users on Twitter are glad Sasha is safe, many couldn’t help but find her real excuse to be comical.

When I skip school because I can't find my hydroflask, but Sasha Obama can't skip school to attend her dad's Farewell Address #wheressasha

After all of that, here’s hoping Sasha gets an A on that science exam.