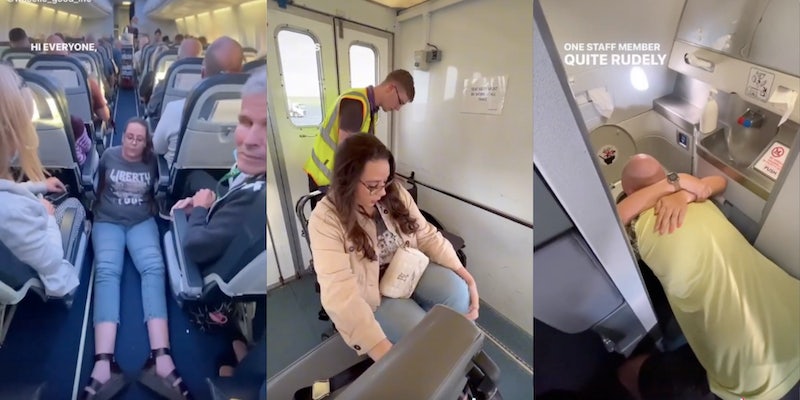 A petition to make accommodations mandatory has over 12,000 signatures.

A TikToker says a flight she took did not have adequate accommodations for her as a wheelchair, and she had to push herself—while seated on the floor—using her hands down the aisle to use the bathroom.

Jennie Berry, who goes by @wheelie_good_life on social media, posted a TikTok on Sept. 20 showing herself seated on the floor in an airplane aisle while scooting to get to the plane’s bathroom. She says that when traveling via airplane, she typically uses an “aisle chair” provided by airlines to move about the plane. An aisle chair is a wheelchair that is narrow enough to fit in an airplane aisle.

Berry says on her recent flight on AlbaStar, the airline said there “wasn’t enough room” for an aisle chair and wouldn’t help her get to the bathroom. She says one “staff member” even told her that “disabled people should just wear nappies,” or diapers, when they fly.

“When you’ve gotta go, you’ve gotta go,” Berry says in a voiceover while a video of her partner lifting her to the plane’s toilet plays. “There’s a lot of improvements to be made when it comes to access within the travel industry—and I hope they’re made soon.”

On Tuesday, Berry’s video had over 12 million views on TikTok.

Here’s how I had to get to the toilet on my recent Albastar Airlines flight. They told me I should wear a nappy and wee in my seat instead of having an aisle chair onboard…

Berry has started a petition on Change.org to make aisle chairs “mandatory on all U.K. flights.” At the time of publication, over 12,000 people had already signed. In the U.S., airlines are required to provide those with disabilities with “a seat assignment that best accommodates” them. In Berry’s case, that would have been a seat near one of the plane’s bathrooms.

Berry turned off comments on her viral video. The TikToker is one of many who have shared their tragic experiences about flying as a person with disabilities.

The Daily Dot reached out to Berry via email and AlbaStar via contact form.