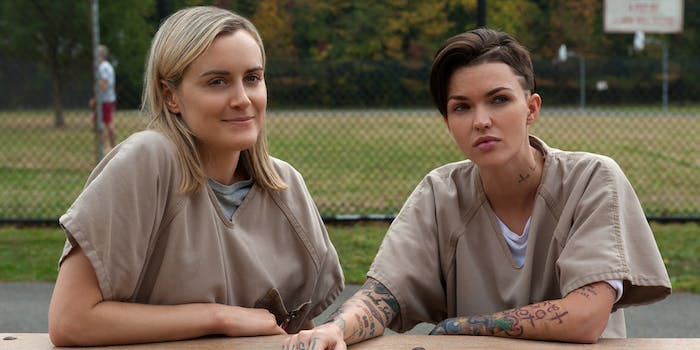 Visitation scenes often serve as crucial plot points on 'OITNB,' but nothing can prepare you for that trip.

Don’t wear too much makeup,” my friend said to me as I was getting ready to leave. We were preparing to visit another friend of ours at Rikers Island, New York City’s main jail complex, located in the East River between New York’s Queens and Bronx boroughs. The comment caught me off-guard. It would be my first time in a correctional facility of any sort.  Our friend was being held there for a nonviolent crime while awaiting her sentencing. Though I’m not normally one for heavy makeup, I took his advice to heart before setting out, pairing my bare face with nondescript black clothing.

The United States leads the world in the number of citizens it incarcerates. In 2010, the American prison population reached 2.2 million. Prison life returned to the national spotlight recently, due to the popularity of Netflix’s Orange Is the New Black and incisive, in-depth reports like this one by the Marshall Project and New York magazine. Recently, President Obama became the first sitting U.S. president to visit to a federal prison, touring the El Reno correctional facility near Oklahoma City.

The president’s visit—in which he met with six nonviolent drug offenders, accompanied by presidential aides, officials, and Secret Service agents—was a landmark event, one whose ripple effects will be felt for some time. But the logistics of the event have somewhat been glossed over in press reports, and while visitation scenes often serve as crucial plot points on Orange Is the New Black, rarely does the show breach the topic of what the journey there, or back, is like.

Nothing can really prepare you for that trip.

In an episode from Orange Is the New Black’s third season, Piper meets with her family on her birthday amid a celebratory scattering of crumpled junk food wrappers. Perhaps it’s different in other detention centers, but at Rikers, the visiting room doesn’t allow anything: no snacks, no pens or paper—even the elastic band around my wrist had to go in my hair before I was allowed in.

And before that moment of awkward relief, when you can finally see and touch your loved one, there are several hours prior of standing, waiting, searching, checking in, and more waiting. Rarely do you feel like you know what’s going on. Often your questions go unanswered. I was so dumbfounded after arriving to the site—only reachable via the Q100 bus originating in Long Island City—that I found it difficult to follow visitors’ directives, which largely seem assumed rather than explicitly stated.

Inmates detained at Rikers Island are allowed three visits per week before they are sentenced and only two after. If a friend or relative wants to visit, they must follow a strict set of guidelines found on the New York City Department of Correction webpage, which explains that the visit schedule is based on the first letter of inmates’ last names. Visiting hours vary depending on the day, as does the time by which visitors must register before they are allowed in. No visits are allowed on Mondays or Tuesdays.

Before that moment of awkward relief, when you can finally see and touch your loved one, there are several hours prior of standing, waiting, searching, checking in, and more waiting.

My friend and I joined a seemingly endless line of visitors outside one early Thursday afternoon. Approximately 1,500 people visit Rikers on an average day. On our trip, well-dressed toddlers paddled up and down the aisle as a faded red Amnesty Box (where visitors can dump prohibited objects before they are searched for their visit) came into view. Closer towards the entrance, lockers were available for rent for visitors to deposit all of their belongings, save for their ID, which is necessary for entry, and whatever permissible items they may be delivering to inmates. Cell phones are not permitted on the premises past this first set of lockers.

After being sniffed by a police dog, I came face-to-face with my first correction officer. My friend had gone ahead and I, stupefied, emptied my pockets and held out my hands in a semi-shrug.

“Your ID, sweetheart,” the officer said, to which I quickly complied before falling in with the other visitors. Similar to the protocol at LaGuardia Airport—not more than 250 feet away—visitors to Rikers Island must take off their shoes and go through a metal detector before checking in. A white card—with the visitor’s name, the inmate’s name, and the visitor’s photo printed on it—serves as a sort of ticket to the impending visit. Here, inmates’ friends and family may drop off permissible items in person if they do not intend to stay. Those who are staying are directed toward different parts of the visitor center, where they wait for a bus to arrive and take them to various portions of the complex. We waited with about two dozen other visitors for the school bus, familiar in its shape but not in its white color, to take us to the Rose M. Singer Center, the 1,139-bed all-women’s portion of the complex commonly referred to as “Rosie’s.”

The routineness of a visit to Rikers is innocuously mundane. After we waited for the guards to unlock the building and let us into the foyer, we again offered our IDs, got our hands stamped in blacklight ink, and again removed our shoes before going through another metal detector. In front of the guard, day after day, countless visitors empty and turn out countless front and back pockets.

We locked up the belongings we still had with us: some cash, the key from the first locker, and our IDs. My cellphone, and connection to the outside world, had already begun to feel very far away. In the waiting room before being allowed inside, you’re left with nothing but the white piece of paper you received at check-in. Visitors mill about and wait. Some sit in the plastic chairs. Some eat snacks from the three vending machines against a wall in a corner of the small room. A TV on the wall blares mind-numbing daytime television. It’s a lot like a doctor’s office, until the officer calls out the inmate’s last name instead of yours.

We stood against a wall and wait for the next checkpoint, a visual inspection conducted by one of the uniformed correction officers where they check for any last traces of contraband or prohibited items. I was instructed to sit in a plastic chair before removing my shoes and socks, lifting up my pant legs as far as they’d go, turning out my pockets, and running my fingers along the waistband of my pants and the neck of my shirt.

The female officer instructed me to lift my shirt, grabbing my bra along with it; she told me to “let my breasts hang out” as I bent over. Not exactly sure what she meant by the directive, I found myself in an awkward position, half-bent as I asked her to repeat the instructions over again. Some women, I later assumed, could potentially hide illicit objects under their breasts, but I didn’t ask, and this certainly was not explained as I went through the motions. What was jarring to me was literal protocol for the prison’s employees.

Visual inspection complete, I waited in another plastic chair in a small room that faced dark, one-way glass. My friend had been given a long, lime green T-shirt that covered a rip in his jeans, which is also prohibited. When the heavy iron door finally rolled back, we stood, illuminated our hand stamps under a blacklight, and handed over our paper passes to one of the guards.

The female officer instructed me to lift my shirt, grabbing my bra along with it; she told me to “let my breasts hang out” as I bent over.

Finally, we were led past a small room of inmates in loose, khaki-colored jumpsuits craning their necks to try and catch a glimpse of their visitors as they entered. We were brought to a corner of a room filled with a handful of mostly low tables and the same plastic chairs. We were instructed which side of the table to sit on. To my left, behind glass, was what looked like a small, abandoned daycare room. To my right, a number of visits were already underway. The neon of another inmate’s manicured toenails caught my eye, until finally my friend emerged in a jumpsuit and plastic sandals.

Our hour together began to tick away. Somewhere in the middle of it, a guard came over and told me I couldn’t cross my legs. “They’re really strict here,” said my friend.

Eventually, a guard came over and handed back my card, a silent signal to the end of the visit. Once it was over, we waited nearly an hour for the school bus to take us back to the entrance. When we got there, several hours after having first arrived, we were, quite literally, back where we had started.

After President Obama toured El Reno’s premises, he commented on our society’s tendency to take for granted the vast numbers of America’s youth that the country incarcerates.

“These are young people who made mistakes that aren’t that different from the mistakes I made and the mistakes that a lot of you guys made,” Obama told reporters. “The difference is, they did not have the kind of support structures, the second chances, the resources that would allow them to survive those mistakes.”

For its wonderfully diverse, female-driven cast of characters, Orange Is the New Black offers a leveling of the playing field that echoes Mr. Obama’s sentiment: No matter the backgrounds or former social status of these women, they all “took a wrong turn on the way to church,” as the character Poussey quips, and in various ways, these women ended up in the same place. In prison, not one of them can be immune from the imposed forfeiture of identity, the skewed politics, or the horrible food.

For me, seeing such an array of women fictionally subjected to the same fate helped me come to terms with the reality of seeing someone I personally knew and loved behind bars. It felt as though, with relative ease, our positions could have been swapped: my solemn, black outfit for a baggy, tan jumpsuit. I had read about Rikers and the prison system before my visit, unwittingly parroting Piper’s season 1 naivete:

In many ways, going to Rikers helped illuminate the multitude of things I didn’t know—couldn’t know—without going myself. I didn’t know, for example, that altogether the visit would take the entirety of a day, or that I would feel so emotionally and physically exhausted afterwards. OITNB spends precious little time on the topic. As I retraced my steps back home, I found myself thinking about those who might be unable to get the time off from work to make the trip and how long the journey there and back was.

Now I know that the road to reform is infinitely longer.