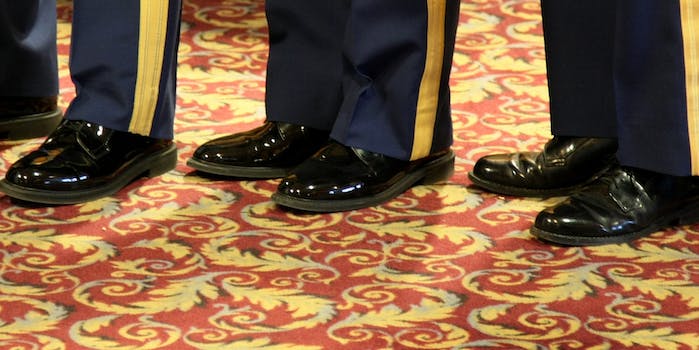 Sixteen black, female West Point graduates are being investigated for a photo of them posing in uniform with raised fists. The photo, which surfaced on social media in late April, sparked Internet outrage.

Some people, like John Burk, a blogger and Iraq veteran, claim that the raised fist shows solidarity with the Black Lives Movement. According to Burk, this act is political and stands in defiance of Department of Defense Directive 1344.10, which prohibits political activities while in uniform.

The photo is part of an annual tradition of graduates taking pictures as groups. These pictures can be humorous and are often meant to convey a sense of group identity. The New York Times reported:

This is not the first time students have made a political statements in an Old Corps photo. In 1976, the year before women were admitted to the academy, male cadets widely referred to themselves as “the last class with balls,” according to an officer who teaches at West Point. The officer, who requested anonymity because he was not authorized to speak, said that a number of seniors that year posed for a photo holding armloads of basketballs, footballs and baseballs. They were not punished, the officer said.

As Randi Gloss, writer and founder of Gloss Rags, pointed out in a blog post, even if the women were raising their fists in solidarity with the Black Lives Movement, the movement is not a political party.

Black bodies quickly become targets when expressing any form of solidarity with the very real and very traumatic Black struggle. It is a direct affront to a society that feigns its “post-racialness” as much as the toupe that sits atop Trump’s head.

In general, Gloss says, she doesn’t believe the raised fist is particularly political, but instead cultural. “People have been raising their fists for years in as a marker of cultural solidarity of power and strength,” she told the Daily Dot.

“Cultural connection and pride is important for a people who were told to forget their language and their culture… So often our blackness is seen as a political act. It’s seen as a threat and dangerous, when all these women are trying to do is celebrate their incredible and remarkable accomplishment.”

However, detractors like Burk claim the picture is akin to a white person using a Nazi salute.

Out line? Yes… We were taught from Day 1 not to wear uniform to make a political statement.https://t.co/xWZDy0YS3E

Stacy-Marie Ishmael took to Twitter to argue that the comparison between a minority group and a group responsible for the genocide of 10 million Jews was “is epic point-missing.”

West Point Lt. Col. Christopher Kasker, director of U.S. Military Academy Public Affairs, told the Daily Dot in a statement, “An inquiry into this matter is currently ongoing. We can confirm that the cadets in this photo are members of the U.S. Military Academy’s Class of 2016.”