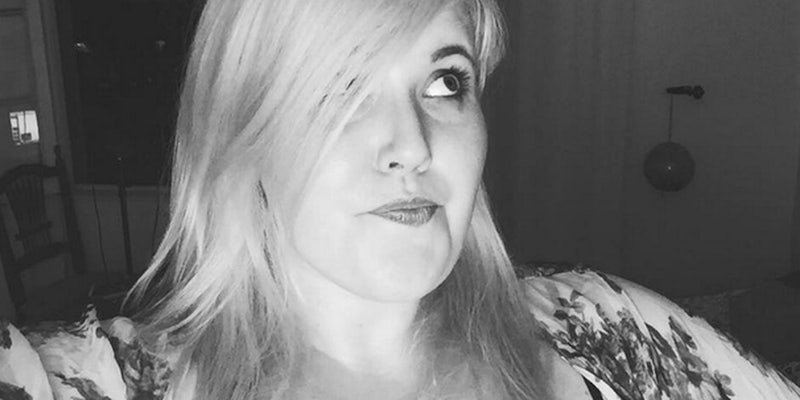 So Meghan Tonjes called up the clinic to confront them.

Imagine finding out that a company is using a photograph of you, without your consent, to advertise its products and services. Now imagine that the company is a weight-loss clinic.

This is exactly what happened to vlogger and singer-songwriter Meghan Tonjes. As Styleite reported, her image is being used without her consent by a weight loss clinic in Hiram, Georgia called SnapThin. The clinic sells “fat-burner injections” and B-12 injections to its customers.

Tonjes filmed a vlog immediately after learning that her image had been stolen and posted it on YouTube Sept. 23:

Tonjes explained that she awoke to a Facebook message from a follower, sharing that her picture was being used as an alleged success story by SnapThin. Apparently, Tonjes’ photograph is hung up on the wall in the clinic, accompanied by the initials D.A.,  and a completely fabricated, “miraculous” weight loss journey.

“I am shaking right now, I am so furious,” Tonjes said in the video. Some people might have just tweeted angrily at the clinic and then let it go. But Tonjes turned on her video camera, and makes a phone call to the clinic.

In the video, a receptionist at the weight loss clinic (who, granted, is just doing her job and probably hasn’t got a clue what’s going on) answers questions asked by Tonjes about “the blonde girl called D.A.” The receptionist said she can’t reveal the identify of “D.A.,” but does mention the (completely fabricated) amount of weight that “D.A.” lost. She then offered to put Tonjes in touch with Dr. Jay Goldklang, who works at the SnapThin clinic, to learn more information.

That’s when Tonjes let the receptionist know that the picture belongs to her, the weight loss journey story is a lie, and the details of her weight that they are giving out aren’t even accurate. “I don’t know who this man [Dr. Goldklang] is, or why my picture is being used to promote [a clinic] that I haven’t used,” Tonjes said, concluding that they’ll be hearing from her lawyer.

Tonjes is no stranger to picture drama; in May of this year, Instagram ran afoul of the popular vlogger by removing one of her images, a picture of her rear end.

Depending on the source of the photo used by SnapThin, there may not be much her lawyer can do; Facebook users routinely experience their photos being harvested and then repurposed in Facebook weight loss ads that they did not consent to. (Disclosure: This once happened to me. Not only was it nearly impossible to track down the account with the ad in the first place, Facebook was profoundly uninterested in doing anything about it.)

Tonjes routinely posts body-positive images of herself on Instagram, adding irony to the situation that it was used by a weight loss clinic.Tonjes became a familiar name in recent weeks due to her heartfelt video response to the fat-shaming video from comedian/actress Nicole Arbour that made the rounds.

Whatever the outcome with SnapThin, it’s good to see someone confidently speaking up to protect her own image.