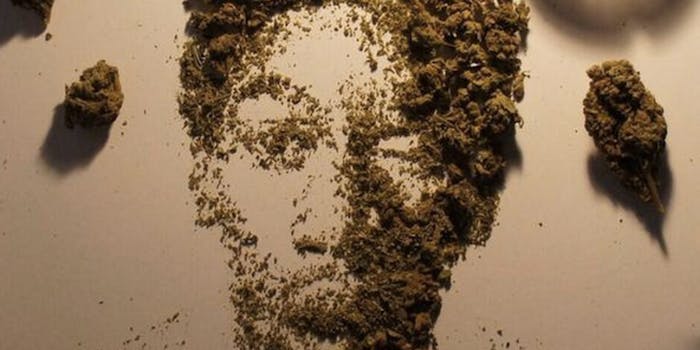 Celebrate 4/20 with these sculptures of celebrities made of weed

These weed sculptures of Wiz Khalifa, Snoop Dogg, and Arnold Schwarzenegger are nothing short of inspirational.

Wiz Khalifa has a demonstrated propensity for bud. (Why else would he name his breakthrough album Kush & Orange Juice?). That makes him a prime candidate, then, for a mind-blowing portrait created entirely from marijuana. What better way to spend 4/20 than by admiring some beautiful art made from weed itself?

Artist Tyler Remikie “painted” the weed portrait in 2013 using a razor blade and what looks like a fresh half-ounce of Amnesia Haze weed.

The portrait is a few years old, but it’s going viral on Twitter today, as it probably does every 4/20. Remikie said Khalifa himself called the video “dope” and the English rapper Chipmunk recently commissioned a box to store weed in, which Remikie decorated with a pointillist portrait.

Remikie, who is British and sells his hyper-realistic portraits on his website, also made a portrait of Rick Ross using a substance that looked like cocaine. In-progress videos of both the portraits received hundreds of thousands of views on World Star Hip Hop and on social media.

“I started messing about making art from random things that people wouldn’t regularly see,” Remikie, 21, told the Daily Dot. “One day I had a random idea to burn an image into toast. It seemed to catch people’s attention so I went on to do Tyler the Creator in ketchup, which got enough attention that he himself saw it.”

Remikie said, ironically, that he’s never been a drug user. He decided to use drugs as his materials to spark a conversation: “I thought it was a nice contrast, something normally seen in a ‘bad’ light getting used for something positive.”

Because of legal issues, Remikie’s portraits weren’t made to be permanent. The weed and coke weren’t glued to the surface, giving the works a sort of hardcore mandala quality, as if made by a crew of super high Tibetan party monks.

The works have a sort of hardcore mandala quality, as if made by a crew of super high Tibetan party monks.

“I love Snoop and he is obviously one of the best celebrity subjects to create a marijuana portrait out of,” Mecier told the Daily Dot. 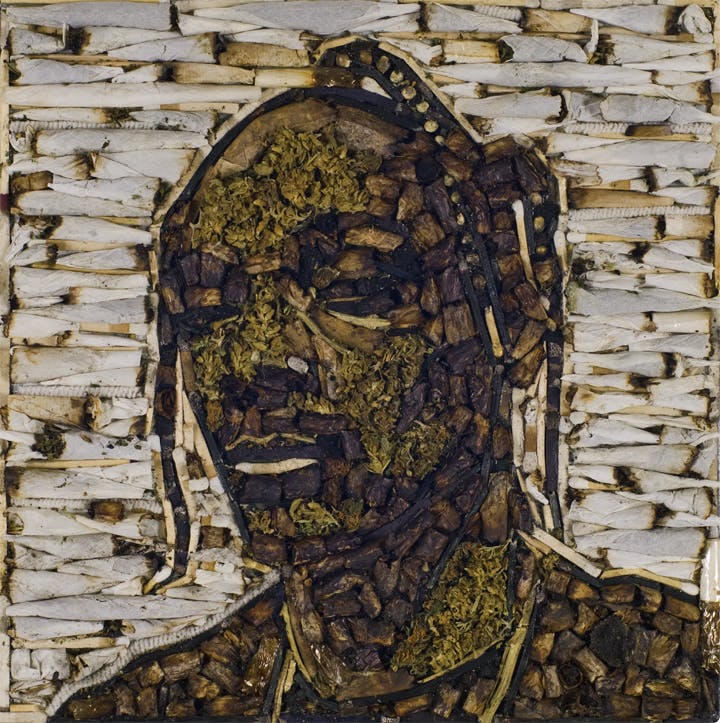 In fact, Snoop himself loved the portrait, tweeting that it was his “fave flicc so far” followed by the hashtag #puffpuffpasstuesdays.

The portrait sold to a client, and Mecier told the Daily Dot that his policy was “don’t ask, don’t tell” when it comes to the sketchy legality of selling art made out of drugs. The portrait was sold at a Hollywood gallery, however, so chances are the buyer was a Californian with a medical marijuana license.

Some artists chose to distinguish the medical nature of their materials right off the bat. Artist Trek Thunder Kelly, also based in California, sculpted a figure of Arnold Schwarzenegger out of $1,000 worth of medical grade pot and titled it “Going Green: Governator T-1000.”

But let’s not forget perhaps the best of all art materials: simply smoking weed itself. In 2012, Brazilian artist Fernando de La Rocque “painted” a series of works on paper using marijuana smoke as a medium for a show titled Blow Job. Placing stencils over sensitive paper, de La Rocque lit a joint and blew the smoke into the stencil. The results were fluid and mottled, reminiscent of coffee stains, and made a strong statement about decriminalization. “More important than freedom to smoke marijuana,” said de la Roque in a press release accompanying the show at a Rio de Janeiro gallery, “Is the freedom to think about it and make art with it.” Some wise words to live by this 4/20.