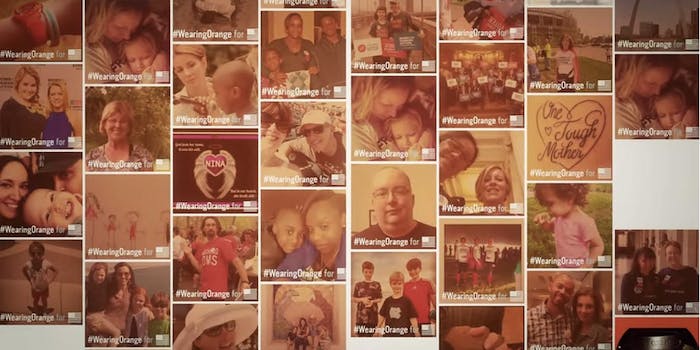 What started as a small project to remember a young woman who was shot has turned into a national movement.

June 2 would have been Hadiya Pendleton’s 18th birthday. But the Chicago native’s life was cut short due to gun violence, two weeks after she performed at President Obama’s second inauguration.

Now, friends, family and people all over social media are honoring Pendleton’s life with the first ever National Gun Violence Awareness Day, as well as a Wear Orange campaign and the #WearingOrange hashtag.

The original iteration of the movement was called Project Orange Tree. It was launched by friends from King College Prep High School in the wake of Pendleton’s 2013 shooting death in a Chicago park. During the first week of April 2013, Pendleton’s friends all wore orange to honor her memory. Orange is the color worn by hunters to make sure they’re visible in the wilderness.

We are #wearingorange in support of National Gun Violence Awareness Day. Get involved: wearorange.org

Before Pendleton passed away, Khepra says she and her friends were “in a bubble” when it came to gun safety.

“We didn’t expect something like this to come and affect us,” she said. “We thought it only affected people who chose that type of lifestyle.”

But once Khepra realized that gun violence impacted anyone and everyone, she says she realized she had to take action. “No one should have to lose their loved ones because of reckless gun violence.”

According to the Wear Orange campaign, every day approximately 88 Americans are killed by gun violence. In Chicago alone, there were 2,500 shootings last year.

“I think you could walk up to anyone who lives in the south and west side [of Chicago] or anywhere where there’s economic disparity, and ask if they’ve been directly affected by gun violence, they’d say yes,” Khepra said.

But the ultimate goal for the participants of Wear Orange is to raise awareness of the omnipresent scourge of gun violence.

“The orange lets everyone know ‘I’m here. I’m standing out…when the sun hits it, it gets brighter,” Hadiya’s father, Nate, said in the campaign video.

Her mother Cleo added, “I think it could save lives.”

Screengrab via Everytown for Gun Safety/YouTube