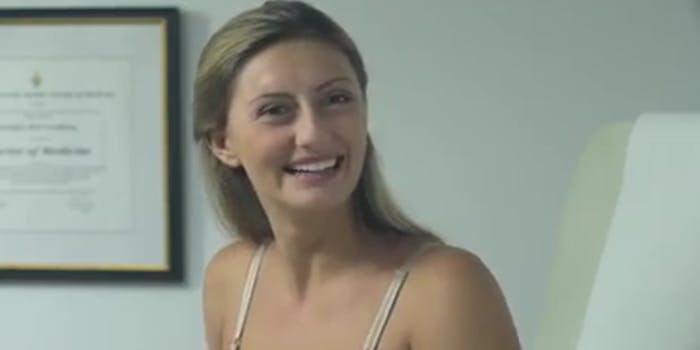 This new online campaign hopes you never take off your bra. Is it a solution to a problem that doesn’t really exist?

Warner’s Bras just launched a new campaign, giving hope to women everywhere who struggle with the tyranny of uncomfortable brassieres. They want us ladies to get comfortable. So comfortable, we never want to take our bras off.

That’s what Warner’s is pitching, at least. The accompanying video, titled “Girls Gone Comfortable,” depicts a woman in a bath, a mother attempting to breastfeed, and a patient in a gynecologist’s office all wearing their Warner’s bras, because they forgot they’re wearing them. Because comfort!

The Brooklyn agency behind this campaign, Carrot Creative, is encouraging a discussion around “comfort” on social media, by employing the #GetComfortable hashtag on Twitter, Instagram, and Vine. They’re even pairing with Vine megastar Meagan Cignoli for six-second promotional videos.

The idea of a bra so comfortable no one knows it’s there sounds great in theory, and from the looks of the Carrot website, mostly women worked on this campaign. Still, it feels a little misguided. Are we supposed to #GetComfortable with the idea that bra-lessness make us un-ladylike? Is this a solution to a problem that doesn’t really exist, like the Snuggie?

And if we can finally make some progress in tampon ads, why can’t we do the same here?