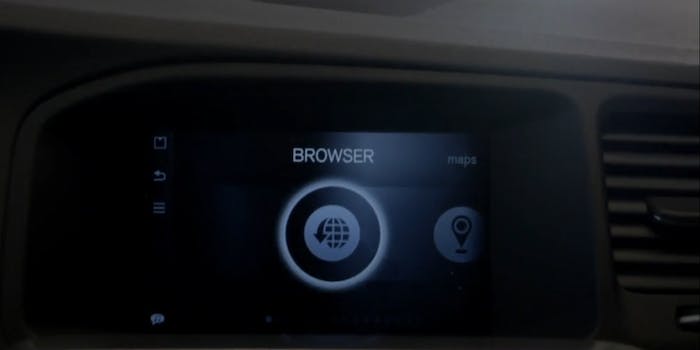 New Volvo brings Wikipedia to your dashboard, for some reason

It's the only car that lets you look up random historical trivia while you drive.

If O.J. Simpson had known about High Speed Pursuit Syndrome, he might never have taken off in his Bronco. If Thelma and Louise had been able to read about notable car crashes, they might have chosen a different route through the Grand Canyon.

That seems to be the idea behind Volvo’s new Sensus Connect online dashboard system, revealed at Consumer Electronics Show (CES) 2014. On top of delivering practical driving advantages like the ability to locate parking and stream Pandora, it’s offering users Wikipedia.

Because you never know when you might need to know the humidity levels of Albuquerque. And let’s face it, if you’re in Cawker City, Kansas, and don’t have Wikipedia handy to tell you that while you’re there you can see the world’s largest community-rolled ball of twine, you’ve missed the whole point of going to Cawker City.

Of possibly higher interest to drivers is that in addition to allowing you to connect your smartphone to the car’s console system, the whole car functions as a mobile Wi-Fi hotspot, so your passengers can connect on the go. Why that means you need to have Wikipedia on your dashboard is anyone’s guess, but since the system also offers 10,000 radio stations for you to fiddle with as you drive, what’s a little wiki reading going to hurt?

The online system will also allow users to search for restaurants and other nearby locations, as well as find and pay for parking on their own. Earlier versions of the Sensus, the Connected Touch, also have a built-in Internet browser, so it’s hard to know what advantage having Wikipedia as an independent feature on the dash really lends. Still, it’s clear that the car company at least has the idea of “convenience” taken care of. Whether it’s a convenience that’s worth the temptation of firing up Pandora and reading about the life and times of Richard Helms (the longest biography on Wikipedia) as you drive is a question every pilot must decide for themselves.

It’s also one that comes with a price tag. Older Wiki-less versions of the Sensus started around US $1,650. With the upgrade, the 2014 Volvos that carry the onboard companion are expected to jump in price by up to $1,200.