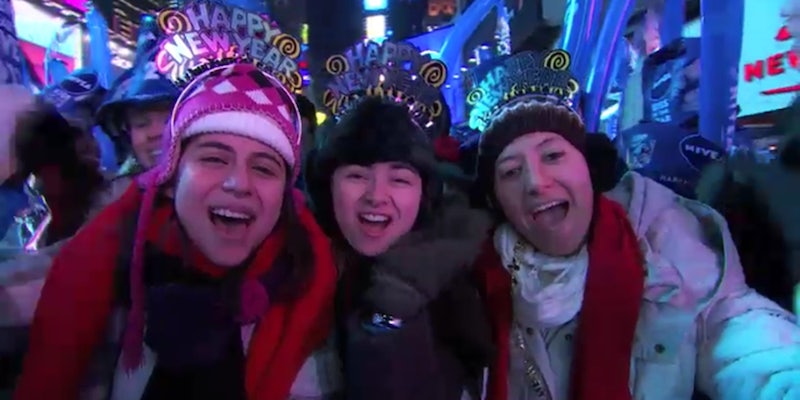 Here are some options for celebrating if you hate crowds, freezing temperatures, and egg nog hangovers.

New Year’s Eve is a special circle of hell, in which the pressure to “go big” can be overwhelming. It’s often an evening of anticipation and build up for 30 seconds of release, which makes it the equivalent of a bad lay. Last New Year’s Eve, I witnessed two women fighting each other with their stilettos over a cab.

If you must go out, there are ways to make the night less stressful, like Taxi Magic, a taxi locator app (using Uber on NYE will be a nightmare), and a blood alcohol calculator, though it’s only really useful if you’re sober enough to remember you downloaded the app and log your nogs.

As a response to the IRL pressure to party, more people are celebrating New Year’s Eve with virtual parties, organized via Facebook. Here are a few more options for celebrating if you hate crowds, freezing temperatures, and egg nog hangovers:

Yes, you can now watch the Times Square festivities on your Apple or Android device. This seems sort of sad until you realize you can effectively cut Ryan Seacrest out of the picture if you want. You’ll be able to tweet at the ball too. The ball seems kind of sassy:

Or download the New Year’s Eve Live app and check in with webcams in different time zones.

But really, isn’t watching a ball drop want they want you to do? Human brain John Green listed off other objects traditionally dropped on NYE in a new Mental Floss video, including an electronic MoonPie in Mobile, Ala., and a drag queen named Sushi in Key West. You can watch both online.

Why are we obsessed with Netflix’s Fireplace for Your Home, a DVD of a fireplace that doesn’t even keep us warm? Well, If you fall asleep before midnight, you won’t burn your house down. And if you stare at it long enough, you might see God, depending on how much you’ve had to drink. Pair this with the Real Fireworks app, which will be free to download on New Year’s Eve, and arouse your inner faux pyro.

On-demand delivery service Postmates launched in San Francisco before expanding to Seattle, New York City, and most recently Washington D.C. They boast delivery from retail stores and restaurants in your city in under an hour, but on New Year’s Eve, you might want to place your order for 12 bottles of Champagne early. Same goes for Seamless, which allows you to order food online from restaurants in your city.

There are plenty of Spotify and YouTube compilations for a virtual dance party, and Philadelphia oldies station DJ Jim Dougherty is orchestrating a dance party via Facebook, where you can request songs and interact with other listeners. Any playlist you make for the evening should definitely include this song, which includes crucial NYE advice: “Bring your own lampshade, somewhere there’s a party.”

In case you haven’t heard, a bunch of movies are leaving on Jan.1. Here are 10 you should watch. Also, Blackfish was just added, if you want to lose all faith in humanity.

Speaking of which, if you’re having a party and inviting real people over, this game is a great icebreaker, especially now that there’s a new sex-themed version.

What better time to get insight into your future than on New Year’s Eve? This app features a psychic named Nadia, and the Oranum app offers “rapid fire” video chats with LoveDrNikki on Tuesdays. What could possibly go wrong?