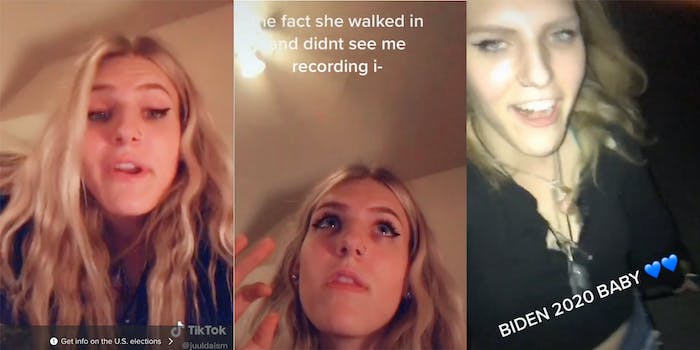 TikToker votes for Biden, parents kick her out of house in viral video

Her parents learned about the viral video and told her 'Congrats on 12 million.'

An Austin-area TikToker went viral with videos documenting her voting for Joe Biden in the most recent election, to her parents’ dismay, followed by her parents kicking her out of the house the night Biden gave his victory speech. The videos are gaining a new round of virality even as she’s documenting new episodes in the saga.

The initial video, posted Nov. 3, shows TikToker @juuldaism in a video telling her parents she voted for Biden, prefacing the announcement by saying, “You better pray for me, because I’m about to singlehandedly ruin my entire relationship with my parents.”

The video shows her contemplating a slate of Republican candidates from Travis County, the Texas county that includes most of left-leaning Austin, then telling her parents that she voted for Biden.

Though that video’s received 14.6 million views and 3.6 million likes on the platform since she posted it, it’s a follow-up video four days that later that’s received significant viral traction, including a refresh Monday on Reddit’s r/PublicFreakout subreddit.

The video starts with her parents reacting to the Nov. 7 Biden victory speech by declaring fraud. Later in the video, she’s filming herself talking in an upstairs room away from the TV, noting that her parents are talking about kicking her out of the house, when her mom comes in and voices her displeasure with the election outcome.

“Your dad is extremely upset,” her mom tells her. “You voted for this asshole. He wants us to wear masks, and he wants us to be locked in, and we’re going to be slaves and peasants! I need your keys right now.”

The last part of the video shows her hastily packing some items and then walking outside while claiming to be “homeless,” posted along with a note requesting, “Anyone wanna cash app or Venmo me a new family that would be great.”

It doesn’t end so bleakly, though. In the next video she posted, she tells well-wishers responding to her prior TikTok post that she didn’t really need money and is going to a friend’s house to stay for a bit, and a few days into the stay, she made a light-hearted video set to RUN-DMC’s “It’s Tricky” showing her make a series of “tough choices” around her situation.

She also did an update a month later, in which she was “still homeless” (staying with another friend and saving up for an apartment), in which discussions with her parents over a possible Thanksgiving meet up “didn’t go well.”

“But my parents just went to a restaurant anyway,” she noted.

She said, in another video on her parents’ reaction, the first thing they said to her upon learning about the TikTok videos was, “Congrats on 12 million,” referring to the 12 million views the initial viral video had racked up to date.

She’s getting closer to home now, according to her documentation of the saga. On Dec. 23, she posted a video she filmed engaging her grandmother (visiting from out of town for Hannukah) and her mother in political discussion.

She does, to her credit, invite her mom to send a message to any of the Trump supporters who might be watching the video once it’s posted. Her mom’s message was simple and succinct: “America first.”