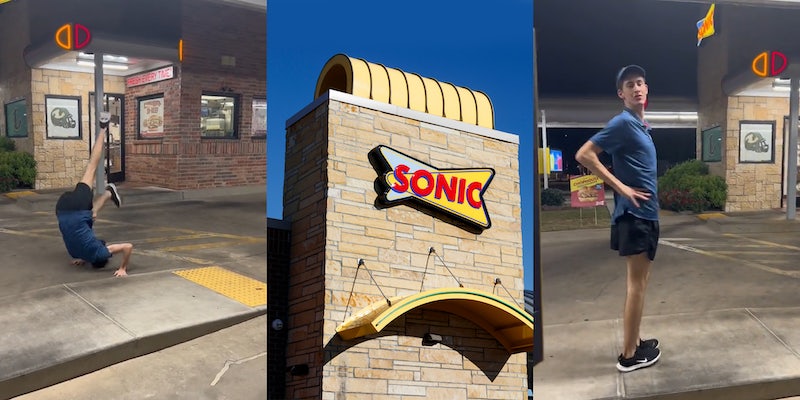 ‘Slayed too close to the sun’: Sonic worker in viral skit says he was fired

'Why do companies not know what’s good for them smh.'

In a viral video, TikToker Kylen Finch (@kylenfinc) shared a skit of him “serving” as an employee at the local Sonic. However, Finch later claimed in the comments that he was fired.

“Welcome to Sonic where we are having a slay day. What can I get for you?” Finch asks over the ordering intercom.

The camera then pans to Finch in his Sonic uniform, who walks out the door and begins dancing, doing cartwheels, and flips.

In the comments section, users praised Finch’s form and made jokes about Sonic.

“Yeah they can serve but can they remember my signature sauce?” one user asked.

“Are all sonics just sponsored by the high school across the street LOL,” another pointed out.

In an updated comment, Finch revealed that he was fired, though it is not clear whether or not his firing was a result of the video. However, this did not stop Finch from posting another video filmed in the Sonic drive-thru.

“Hello, did you have the cherry limeade?” Finch asks a “customer” after opening the drive-thru window.

After receiving the drink, the customer says, “Sir, I asked for extra ice.” Finch apologizes and hands the customer the drink back. He then throws a bucket of ice into the car window.

In the comments section, viewrs laughed at the skit.

“What if I wanted more ice?” one user joked.

“NOT THE EXTRA EXTRA ICE,” another user commented.

The Daily Dot reached out to Finch via Instagram direct message.