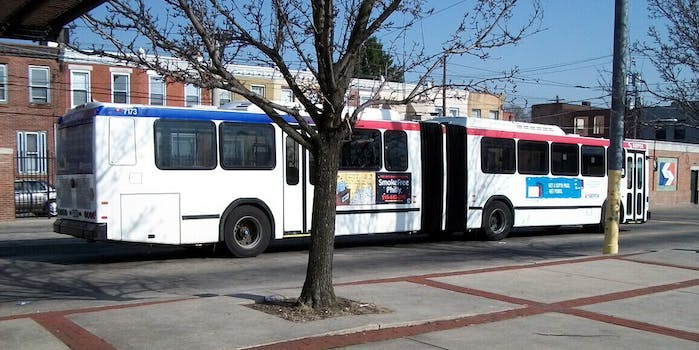 Philadelphia police are trying to identify and locate the mother and child in the clip.

A disturbing video showing a little girl trying to rouse her unconscious mother on a Philadelphia bus has gone viral after it was posted on Facebook.

In the four-and-a-half minute clip, a  little girl tries to prop her mother up, and worriedly repeats, “Mama! Mama!” as her mother slumps over in her seat. Meanwhile, no one on the bus, least of all the person shooting the video, intervenes to help.

According to the description on YouTube, the video was shot on a SEPTA Route 66 bus, which runs through the so-called “Badlands” section of north Philadelphia (an area long been considered a notorious drug-dealing hub.) Considering the location and the mother’s demeanor in the video (she’s slumping over, her mouth slack, and eyes barely open), some commentators on YouTube and Reddit have postulated that the woman might be strung out on drugs. Of course, she could also have some kind of medical condition—the reason for her behavior is unknown at this time.

The video was first posted last Thursday on the Facebook page “People of SEPTA,” where people post mocking photos and videos of passengers on the Philadelphia transportation system. It has since been widely shared, and Philly.com reports that it’s been posted on the Philadelphia police department’s and the Department of Human Services’ Facebook pages as well. Spokespeople for the Department of Human Services and the Philadelphia police department confirmed they were trying to identify and track down the woman and child in the video.

While many commenters have expressed anger at the woman in the video for her lack of attentiveness to her daughter, perhaps the most shocking thing about the clip is that none of the other passengers appeared to have stepped in to try to help. At one point, a male passenger appears to be placing a hand on the woman’s back, but it turns out he’s just using her for support as he makes his way down the aisle.

Now that the video is being circulated on the Internet, Alicia Taylor, a spokesperson for the Department of Human Services, says the department has been inundated with requests to identify and locate the mother and child in the video.

“It’s sad that people stood by and nobody reported this when it happened,” she told Philly.com. “Child abuse is a community problem. If you see something, you have to say something. People sat by on the bus, and no one called police, and no one called us.”