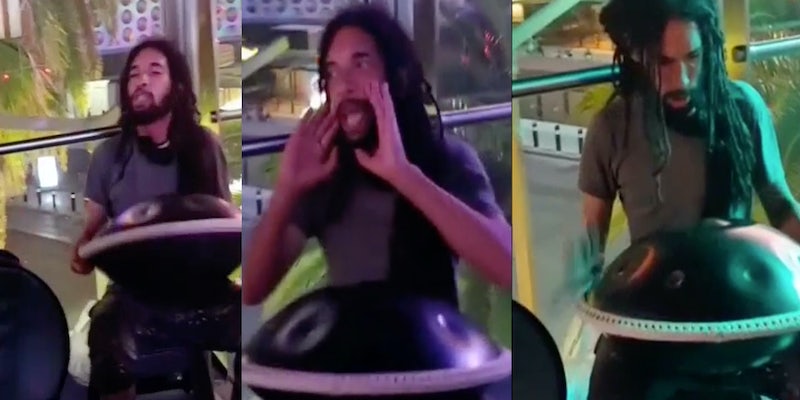 But he's playing a Swiss instrument.

A viral video that surfaced via Instagram and Reddit on Sunday shows a verbal dispute that took place between a Las Vegas street performer and a passerby regarding the cultural origins of his instrument.

The video starts midway through the argument, with the woman and the performer going back and forth.

“I speak salsa so si tu quieres hablar conmigo, tu vas a bailar en salsa o merengue,” the performer says in a mix of English and Spanish. The sentence roughly translates to, “I speak salsa so if you want to talk with me, you are going to dance salsa or merengue.”

“Some jajaja shit,” the performer adds, referring to the Spanish analog of the English “hahaha.”

“Who’s racist?” the woman replies. “Do you know where this instrument comes from? That’s why I said that.” The man then exclaims that the instrument he’s playing comes from Switzerland.

The instrument was later confirmed by commenters to be a PANArt Hang, a percussive hand instrument created by tuners Felix Rohner and Sabina Scharer. Used in the U.S. and throughout Europe, it’s commonly confused with the hand pan, a steel drum of similar shape and styling.

Online, the short clip sparked backlash and confusion about why the performer was accused of appropriation. Many redditors found the clip to be a display of ignorance on the part of the accusatory woman who says that she’s Black, so she “can’t be racist.”

Redditor yupstilljustme commented, “Watched 3x, still don’t know why the Black guy playing this instrument was ‘wrong’. Couldn’t quite hear, did she call him racist before he called her racist? And how is playing any instrument…which is what they are there for….racist?? I’m confused….”

User jsonmusic seconded the confusing, writing, “Why would it be racist if he was playing a steel drum?” But productiveboobs had a more blunt response: “He should have just ignored her and kept playing.”