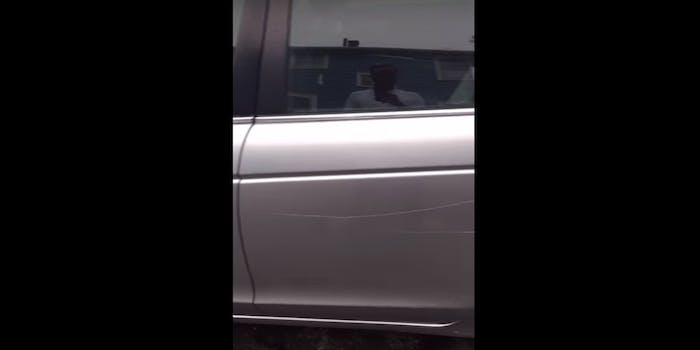 Dude films ex-girlfriend smashing his car, nearly running him over

The video opens with a shot of a silver car and a blue-shingled house in the background on a seemingly quiet street in Boston. Then a woman emerges from behind another car across the street, and we hear the person presumably filming it all: “Terri just threatened to bust my windows.” Moments later, chaos ensues.

According to the clip’s YouTube description, it was shot by Young Wild, the CEO of a record label and lifestyle brand called RaresNoSquares. While we never actually see Young Wild on camera, we hear his voice as a woman referred to as Terri smashes the windows of his car, a window of his house. When he goes outside to inspect the damage to his car, she slams into it—narrowly missing him in the process.

The Daily Dot could not reach Young Wild or anyone at RaresNoSquares for comment. On Saturday, the company’s Facebook page shared the video, alongside the caption “Men r victims of domestic violence too!!!” One person asked “so what is going to happen to her,” to which, presumably Young Wild, replied “Nothing. She out & probably happy she famous.”

If she is “famous,” it’s due in large part to the marketing efforts of Young Wild and the RareNoSquares social networks. They posted it on Facebook, YouTube, Twitter and it’s made its way to Reddit.

They also seem to be amateur lawyers as well, labeling the incident “attempted vehicular homicide.” According to USLegal.com, homicide is the “willful killing of one human by another” and the “only difference between a vehicular homicide and other homicides is the use of a motor vehicle as a weapon, as opposed to a gun or knife.” But for now at least, no legal charges appear in play.