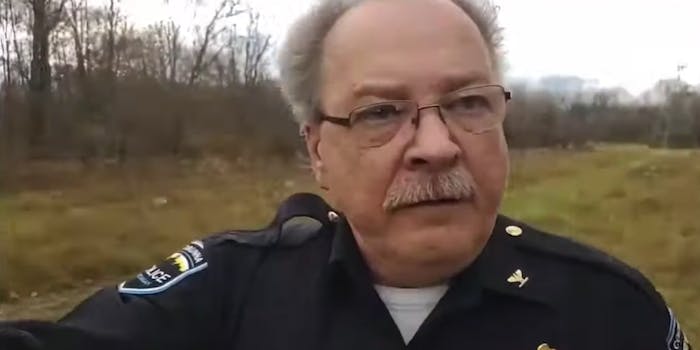 ‘I don’t give a f*ck about your rights’: Police chief fired after video of arrest

The arrestee was filming police activity on public property.

The chief of police in Corunna, Michigan, has been fired after video footage showed him arresting a man who was recording on public property. The police chief told the man that he doesn’t “give a fuck” about his rights.

Matthew Wrosch was recording outside in a field where a suicidal man was threatening to jump from a tower on Friday.

At the start of a live-streamed video Wrosch later saved on YouTube, two police officers approach him and ask him what he’s doing.

“First Amendment protected activity,” the man says. “Unless you got it taped off, I can be here.”

The officers explain they are trying to avoid the man getting agitated and falling before they can talk him down. When Wrosch asks for their names and badge numbers, they comply, and he offers to move farther back to ensure he is out of their way.

“Just because a person’s life hangs in the balance here, I decided that I would move back by these big electric poles so that I’m not as noticeable to the guy,” Wrosch tells his viewers. “I do not want to be the reason he decides to jump, that’s for sure.”

Later, Police Chief Nick Chiros approaches Wrosch solo, and the situation escalates. “Hey you, I need you to get out of here,” Chiros says. Wrosch declines and informs Chiros that he’s protected under the First Amendment.

Chiros repeatedly tells him to get out and appears to grab Wrosch’s recording device before warning that he’ll arrest him if he doesn’t leave. Wrosch asks why he would be arrested, to which Chiros replies, “For interfering.”

After some additional back and forth, Chiros goes to arrest Wrosch, who doesn’t resist but does continue filming. “I guess I’m getting arrested, guys,” he says. “Everybody start bombing the Corunna police with phone calls because he’s illegally arresting me right now.”

In the remainder of the video, Chiros tries to figure out how to turn off Wrosch’s camera (which Wrosch warns him is also a violation of his rights). Chiros appears to dig through Wrosch’s pockets and tells him to “shut the hell up” when he protests. Chiros later throws the phone to the ground, where it continues to record.

“I don’t give a fuck about your rights right now. I’m not politically correct. So shove that up your ass,” Chiros says. “So you’re going to jail. You’re gonna learn the hard way.”

“I’m not going to learn the hard way, you are,” Wrosch fires back.

Wrosch was indeed taken to jail and processed before being released on Saturday morning. He later posted the video to YouTube and filmed himself protesting in front of City Hall.

The incident sparked outrage in the community and on social media, prompting the Corunna City Council to take action. The council voted unanimously 7-0 to fire Chiros, who had been police chief since 2015 and was planning to retire in January, Argus-Press reports.

Wrosch attempted to file a complaint against the two troopers who took him to jail and plans to file a civil suit against both them and Chiros.