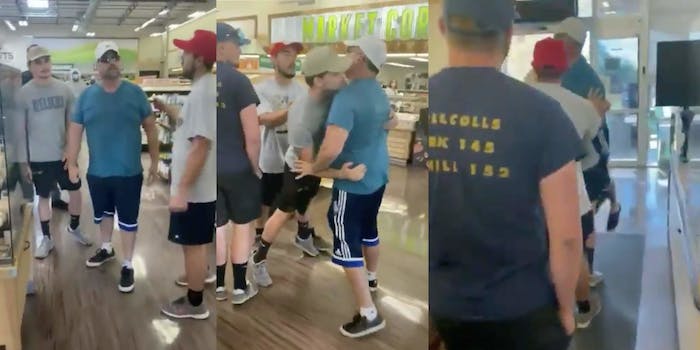 Someone lets out a toot as the man gets picked up.

A man in Arizona was lifted and carried out of a grocery store by his own son while going on an anti-face mask tirade against shoppers wearing masks.

The incident took place at a Sprouts location in Tuscon, Arizona, on Saturday, a spokesperson for the supermarket chain confirmed with the Daily Dot via email.

The less-than-a-minute long video of the incident can be viewed on Twitter, one of the platforms it was posted to.

“These people won’t learn,” the man screams in the video. “You’re a bunch of idiots wearing masks! You know it’s not real!”

A young man is seen trying to calm him down.

“Looks like you fucking got off your mom’s countertop,” he screams, as another man accompanying him tries to calm him down.

He is seemingly accompanied by at least three other men without masks. Two of the men refer to him as “dad” later in the video.

“You look like an idiot!” he screams, while all three men try to ward him off.

A masked customer then approaches him and says something inaudible, prompting the man to scream at the customer. All three of his companions try to hold him back and lead him toward the exit.

Then, his son lifts him up and carries him out of the store. Someone lets out an audible fart as the man gets picked up.

“Fucking [R-word]. Fucking pussies!” he continues screaming while being carried by his son.

Sprouts’ store policy requires anyone above the age of 2 to wear a face mask while in the store. It’s not clear why four men without masks were allowed in the store. A Sprouts spokesperson said the incident occurred at the “entrance” of the store and that management did not get involved, as per “company guidelines,” and instead called the police.