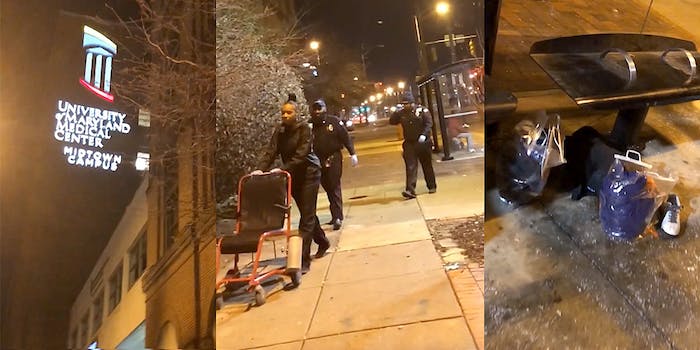 The hospital later confirmed the video was real.

Generally speaking, it’s considered medically irresponsible to discharge a woman from a hospital with nothing but a hospital gown on for protection, especially when it’s nearly freezing outside. But a video from a student at the University of Maryland Medical Center depicts just that, despite the patient clearly needing medical attention.

Psychotherapist Imamu Baraka was walking near the University of Maryland Medical Center’s midtown campus location when he saw a woman being dropped off by security at a bus stop with her clothes and belongings scattered on the sidewalk. The woman, who Baraka proceeded to help, struggled to speak and appeared to have a wound on her head, staggering around in the cold for several minutes while moaning in agony. Baraka said she had no underwear on and was only draped in a hospital gown, with the weather that night resting just above freezing.

The situation left Baraka stunned, believing that, due to possible mental health issues, the hospital decided to discharge her instead of involuntarily committing her to a psych ward. So after an ambulance arrived and returned the woman for medical care, Baraka posted his footage on Facebook early Wednesday morning, criticizing the medical center.

“You can’t expect those with mental health issues to be pleasant,” Baraka said in one of the videos. “Because they’re ill.”

Is this what healthcare in Baltimore City has come to?*** PLEASE WATCH, SHARE and COMMENT ***I just witnessed this…

Shortly after Baraka posted the video, the discharged patient’s treatment went viral, and public backlash against the medical center grew. On Wikipedia, one user edited the University of Maryland Medical Center page, calling out the hospital for “[dumping] patient wearing only a hospital gown at a nearby bus stop in freezing temperatures.” And on Facebook, dozens of negative reviews have flooded the center’s page, with users criticizing the woman’s treatment.

“The institution is deplorable. How DARE you leave that woman on the street like a bag of garbage!” one woman wrote. “Your institution is garbage! You are suppose to help people. Please tell me how you are going to spin this video to justify your employees actions??”

A spokeswoman for the University of Maryland Medical Center later confirmed with the Washington Post that what was in the video was true, admitting that the hospital “clearly failed to fulfill our mission” for quality care based around a patient’s needs.

“We share the shock and disappointment of many who have viewed the video showing the discharge of a patient from the Emergency Department of UMMC Midtown the night of January 9,” spokeswoman Lisa Clough told the Post in a statement. “This unfortunate event is not representative of our patient-centered mission.”

Update 8:40am CT, Jan. 12: On Thursday, Dr. Mohan Suntha, president and CEO of the University of Maryland Medical Center, apologized to the discharged patient, saying that the hospital did not treat her with “basic humanity and compassion,” and taking “full responsibility for this failure.”

According to the Baltimore Sun, Suntha said the hospital system is investigating the incident, interviewing everyone who came in contact with the patient, as well as reviewing discharge policies. Maryland’s Office of Health Care Quality is also investigating.

Baraka, the psychotherapist who found the patient being left at the bus stop, has since spoken to the patient’s mother, who contacted him after seeing the video. Her mother told Baraka that the woman is 22 years old and that she is now in the care of her family.

“We share the community’s anger and concern,” Suntha said.