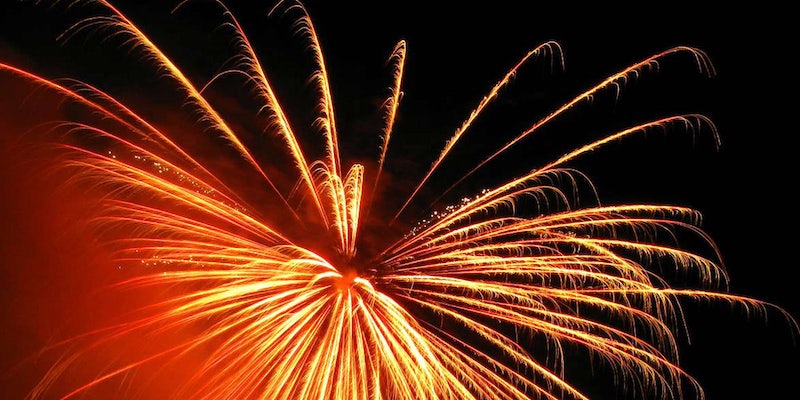 Veteran with PTSD calls for firework awareness on Fourth of July

His appeal has been shared more than 250,000 times on Facebook, but not everyone has been supportive.

The Fourth of July is normally a day for overindulgence: beers, barbeques, sunburn, and—of course—fireworks (and plenty of them). But now, in a photo that has gone viral on Facebook, a veteran is urging revellers not to be so trigger-happy with their pyrotechnics.

The veteran—with 10 years’ military service under his belt—was first diagnosed with post-traumatic stress disorder in 2003 after serving in Iraq in the initial American intervention. Dykes has received treatment and counselling but is still susceptible to symptoms—a prime trigger of which is fireworks.

“His reaction to fireworks last year … left him completely exhausted and feeling like he was under attack and back in combat,” support website militarywithptsd.com says. “[He] remains at the point where a firework blast can prompt symptoms that last hours.”

Dykes is by no means unique: The effects of fireworks on veterans suffering from PTSD is well-documented.

After last year’s Independence Day celebrations, Dykes decided to make a sign to inform his neighbors of his condition and the risk their fireworks pose. The photo was posted on Facebook by the page Military with PTSD—and has subsequently been shared more than 250,000 times in the last two days.

The Cavalry Scout Section Leader isn’t calling for a ban on fireworks; instead he’s looking for prior warning, a little restraint, and “courtesy.”

“Courteous to me means remembering that you are not the only one living in your neighborhood/town/city,” Dykes said. “Some fireworks are expected, and that’s okay. I understand. But, not 24 hours a day. PTSD and combat veterans aside, what about the new mothers trying to keep their babies asleep, the elderly couple that doesn’t need another heart attack induced, or the guy that works odd hours and gets sleep whenever he can?

“Courtesy is just that: remembering that there are other people in this world besides yourself and thinking of them.”

Dykes was offered the opportunity not to deploy after his initial diagnosis, but he chose not to take it: “There was no way I was going to allow my brothers to go back and for me to stay home on the sidelines. The way I saw it, as long as I was deploying and fighting the enemy in their own backyard, they would be too busy to come attack my family in theirs.”

The response on the Facebook post has been largely positive, though some commenters are bizarrely hostile. “As a vet, I will say that I will light up fireworks until the cops show up,” one commenter wrote. “Celebrate Independence Day and NOT exercise my freedoms??? Pfffttt. …you have a better chance of me bowing towards Mecca.” Another wrote that “as a combat vet I can say unequivocally this is the dumbest attention getting bullshit I’ve seen.”

Though it’s too late this year, Military with PTSD is looking to get the signs manufactured on a larger scale for 2015, to raise awareness more widely. Let’s just hope between now and then the vocal minority can learn to give something back to those that have already given so much.