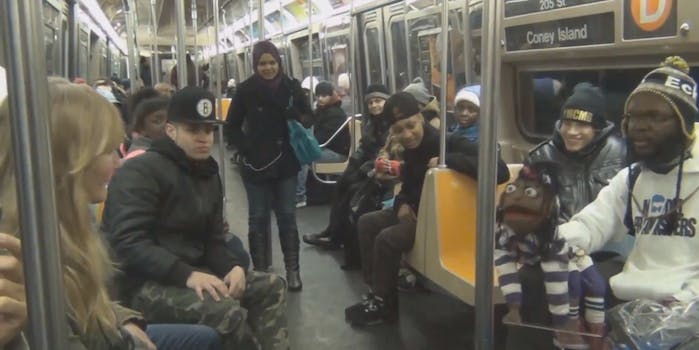 This dummy is trying to pick up girls on the subway. And he's got a puppet with him.

If you’re having trouble picking up girls on your own, why not have a dummy do it for you?

Model Pranksters is just the latest YouTube pick-up artist (PUA) trying to show the masses just how the elusive art of getting girls’ numbers—or just motorboat them—is done. For this occasion, they’ve got a ventriloquist on hand with his own wingman—or at least one good enough to fake it.

Nigel and his puppet travel on the New York City subway. After springing out, the puppet starts to say all the inappropriate things Nigel probably wouldn’t be able to get away with to passengers and the women he’s trying to pick up. Nigel’s largely silent, which draws a huge contrast between the two personalities.

As far as PUAs go, it’s one of the tamer ones we’ve seen in a while. Nigel and the puppet aren’t invading any personal space, but he’s also putting these women on the spot by hitting on them in a very public setting with plenty of people around and no way to immediately escape the situation.

Some are more willing to give their numbers than others, but at least the duo offers a way out for those who are hesitant.

With another video promised on Sunday, we’ll just have to wait to watch even more people get uncomfortable with getting hit on by a puppet.