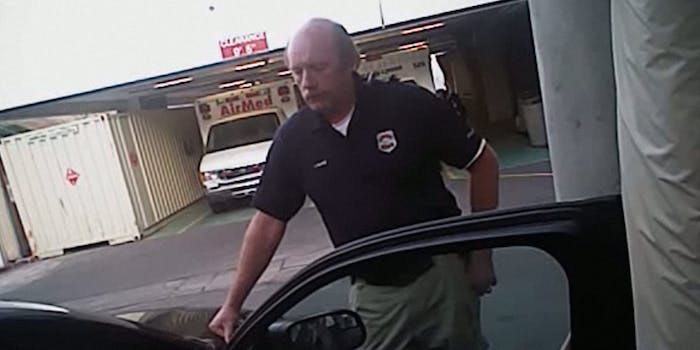 Utah cop who dragged nurse in viral video has been fired

It was a brutal video.

University of Utah nurse Alex Wubbels was seen being forcibly handcuffed and dragged by Salt Lake City police Detective Jeff Payne in a video that went viral last month. It caused public outcry that ultimately led the Salt Lake City mayor and police chief to apologize. Now, more than a month later, the police department has fired Payne from the force.

In the filmed incident, which actually happened in July, Payne repeatedly requested permission to draw blood from a patient who suffered serious burns from a head-on collision. Without a search warrant or the patient’s permission, Payne had no right to draw blood, but he remained insistent with Wubbels. Eventually, after Wubbels phoned her supervisor on the matter, Payne pushed Wubbels outside the hospital and handcuffed her, dragging her to the side. She wasn’t charged, but in the video depicting her arrest, she appears visibly shaken, screaming for help.

During an internal investigation in September, the police department concluded that both Payne and his watch commander, Lt. James Tracey, disregarded the department’s arrest and officer conduct policies when Payne handcuffed Wubbels. In light of the investigation, the department decided to fire Payne, while his commander was demoted back to officer.

“The decision… is in keeping with the high level of accountability we owe the people of Salt Lake City,” Mayor Jackie Biskupski explained, according to CNN. “In making his decision, I am confident Chief Brown balanced the unique stresses each of our police officers deal with daily, and the responsibility they have as leaders in our community.”