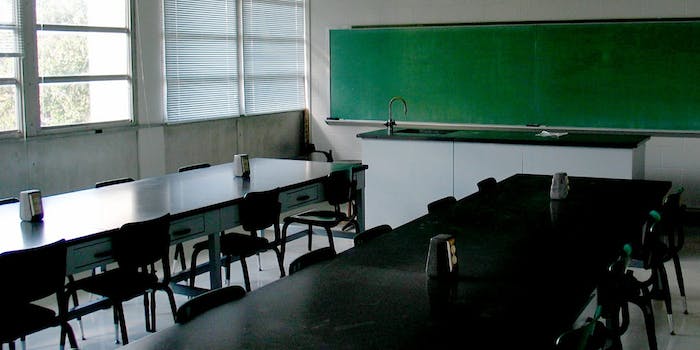 Utah’s Farmington High School has a problem. The new school’s beloved mascot, the Phoenix, sounds too much like “penis” when it’s pluralized. So one local dad is stepping up to the plate and fighting back against the phallic mascot’s name with a petition.

Parent Kyle Fraughton turned to Change.org last week, speaking “on behalf [of] many concerned students and parents” in the school district. As Fraughton explained, he was practicing some cheers with his neighbors in anticipation for Farmington High School’s opening in fall 2018. But when the group realized that they didn’t know the proper plural for “phoenix,” they learned one of the word’s plural forms, “phoenices,” sounds a lot like “penises.”

“We were horrified to hear that the phonetics of the word Phoenices are far too close to the word penises,” a concerned Fraughton wrote online. “I don’t mean to be crass, but don’t want there to be confusion around the point I am trying to make.”

At first, Davis School District clarified that “Phoenix” would stay singular, not plural. But Fraughton warned that reality will be “playing out far differently,” because kids are going to find out that “phoenices” sounds dirty.

“As happened to my neighbors and me, high school kids will take a quick trip to Google or WordHippo to learn that Phoenices is a plural form of the word,” Fraughton warned. “There are many people who find this type of thing funny, and all it will take is one person to figure it out before it goes viral.”

Ironically enough, Fraughton’s petition has since gone viral. Over 3,000 people have signed on to change the mascot, with everyone from Mashable to Jezebel hitting the news. And with all the coverage online, it’s likely that “Phoenices” will be burned into every student’s mind by the time fall 2018 hits.

“While I’d love to yell ‘Go Phoenices Go!’ and can’t wait to hear over the PA system ‘That’s another score by the phoenices, no one can stop the phoenices from scoring!’ and the offensive line described as ‘the biggest group of phoenices we’ve ever seen’… actually forget it, let’s keep the name!” one petition signer joked. “I can’t wait to make tshirts!”

Now, they may never get the chance.