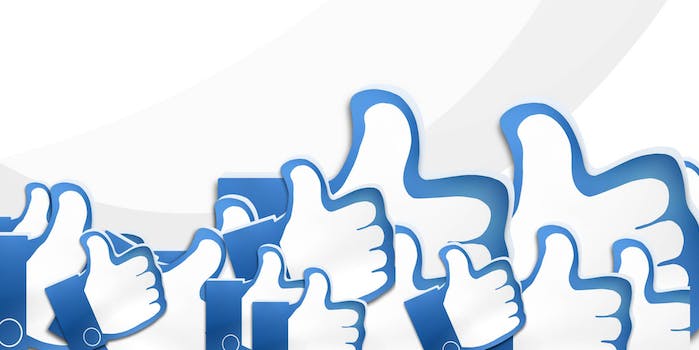 When you apply for your next apartment, be sure to have your ID, recent bank statements, and apparently a Facebook account.

The agreement also allows the apartments to post picture of tenants and their visitors on its page. And according to CNET, it also requires that tenants never post anything negative about City Park Apartments. 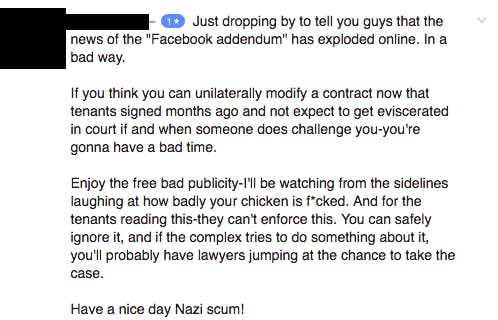 The Daily Dot has reached out City Park Apartments tenants about the situation. Legally, the landlords are allowed to present any lease agreements they want, but that doesn’t mean tenants must sign them or that they’d hold up in court. Zachary Myers, a tenant rights attorney, told KSL.com, “The biggest issue that I have with it is that it seems to be discriminatory against elderly individuals and disabled individuals who are unable to utilize an online presence such as Facebook.”

Reached for comment on behalf of City Park Apartments, a representative from Law Offices of Kirk A. Cullimore, LLC, clarified the complex’s intentions surrounding the addendum: “As part of opening its pool and an anticipated pool party, City Park desired to provide some protection to its residents and its owners from usage of photos on its Facebook page from all community events, including the opening pool party. The ‘Facebook’ addendum was provided to them to assist in that protection.”

But City Park clearly got more than it bargained for when that draft addendum went public. The representative continued:

As easy as it is to say that “it’s just Facebook,” 80 percent of all people do not have Facebook, and having a social media presence shouldn’t be a requirement for housing.

Currently, City Park Apartments has 111 likes on Facebook and a rating of 1.1 stars. How embarrassing.

Editor’s note: This story has been updated to include a statement from the law firm representing City Park Apartments.

Update 9:44am CT, June 1: According to KSL 5 journalist Mike Anderson, City Park Apartments issued an apology to residents, confirming that the addendum was meant to protect residents when photographs of them were taken during community events and recognizing that it was very poorly worded. “No resident is being forced to sign this document and it isn’t a condition of their tenancy here at City Park Apartments,” they wrote.