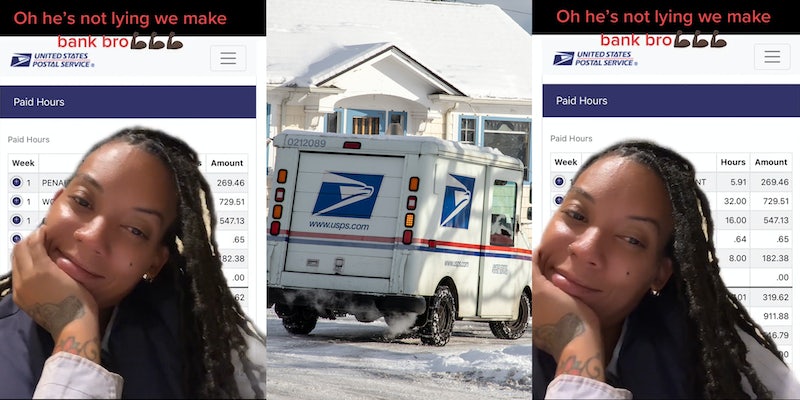 ‘Just know they work the shhhhh out of ya..’

There have been a number of United States postal workers showing off their paychecks on TikTok.

Recently, a mail carrier by the name of Lukas @lukasthecarrier went viral after stating he earned $4,400 in two weeks with overtime while working for USPS. Throngs of TikTokers wanted to see the proof behind Lukas’ claims, and he shared screenshots of his time sheet, which indicated the total amount of money he earned.

Another TikToker, @yafavmaillady, seemingly corroborated this claim by posting a clip of her own, showing off her two-week paycheck, which amounted to $3,507 dollars. She wrote in a text overlay of the video, seemingly in a nod to Lukas, “Oh he’s not lying we make bank bro.”

She posted several hashtags in her caption that highlight how happy she is to have her job and how much she makes as a carrier.

There’s reportedly been a serious dearth of postal service workers, which means that more and more mail carriers are having to work overtime. This, of course, contributed to the fat checks that some carriers are receiving, as both Lukas and the TikToker above clearly worked additional hours over their 40-hours-a-week standard. But a hefty paycheck that could reach well over $100,000 a year along with health, vision, and dental benefits, is an alluring prospect for many Americans.

And while USPS statistics indicate there’s been a significant dip in first-class mail package volume over the years, it’s clear the USPS is in need of workers. Another alluring aspect of the job is that applicants only need to have a high school diploma or GED equivalent.

For the throngs of folks who’ve posted about their jobs not defining their lives and only working gigs to pay the bills so that they can enjoy life outside of work, this could sound like an enticing prospect.

While many who saw @yafavmaillady’s post expressed interest in working with the parcel service, others cautioned against it, arguing that in order to “make bank,” like some folks say, one would have to clock in extras hours every single week to do so.

“Just know they work the shhhhh out of ya..” the top comment on the video reads.

In the comments section, @yafavmaillady responded to some commenters, urging them to give the gig a chance as it’s a secure job, adding that she loves working there.

Then there were those who said they either previously worked at USPS or are currently employed there and are worked to the bone when they’re on the clock.

“I do not miss not having a life literally Eat, sleep & breathe USPS lol,” one said.

The Daily Dot has reached out to @yafavmaillady via TikTok comment and USPS via email.