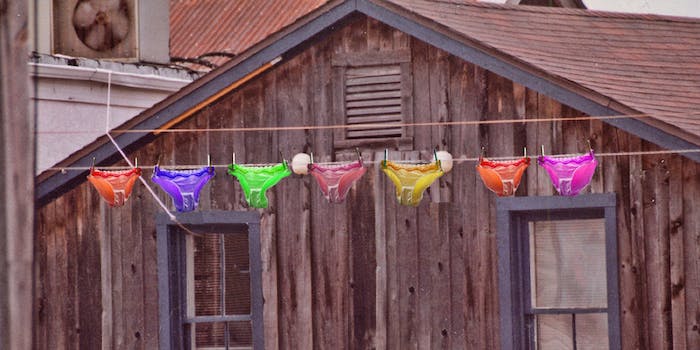 Selling your used panties online might seem like easy money, but redditor MiasPetitePanties says it's not all fun and games.

If you’re a female who’s ever been strapped for cash and done menial labor to pay the bills, you’ve probably briefly fantasized about selling your used panties online to make a quick buck, or at least surfed the panty-selling forums on Craigslist as a gag. But you most likely got freaked out by the thought of selling your used skivvies to strangers on the Internet—or by the creepiness of the term “panties” in itself—and stuck to scrubbing toilets or fetching frappucinos instead.

One brave Welsh girl, however, took every lady’s pipe dreams of panty-selling entrepreneurship to the next level. Redditor MiasPetitePanties has been selling her used underwear on her website and subreddits like r/usedpanties and r/FetishItems for two years. Recently, she gave Reddit a glimpse into the extremely lucrative panty-selling trade with a fascinating AMA (“Ask Me Anything”) on the subject.

Update: Mia, who sells under a fake name to protect her identity, deleted the Reddit thread and her account. She also has moved her personal website.

Mia, who describes herself on her website as a 4’8’’ “teenage Welsh redhead,” has been selling her used tights online since she was 15, after seeing how much money women were making auctioning off their hosiery items on eBay. Her young age, she says, was the main selling point for customers (the minimum age for selling sex in the United Kingdom is 18, but it’s unclear if online panty vendors fall into that category), and she started selling her panties and other intimate items the following year.

You might be wondering: Exactly how much money can one make off selling underwear online? Mia says she charges per hour of wear, with a starting rate of 10 pounds (or $16.82) for 12 hours of wear, charging for “extras” such as “spit, cream pie, peed-in, skid marks, and other bits and bobs.” She also gets a ton of “poopie panties” requests: “Lots of skid marks, wiping bum in panties after pooping, rubbing anal sex toys in panties.” ( Her website also features lots of stomach-turning hardcore scat images to cater to this market, which I strongly advise against clicking through, as they make 2 Girls 1 Cup look like a Pixar movie.)

In total, Mia and her boyfriend, who acts as her photographer/manager, have netted a whopping £20,000, or more than $33,000 US dollars, from her panty-selling business. If you’re male, and that figure sounds enticing to you, Mia says that the market isn’t just limited to ladies: although there isn’t as high a demand for men’s underwear as there is for ladies’ panties, “there is DEFINITELY a market for it,” as well as men’s sneakers and, weirdly, tracksuit pants.

Of course, selling one’s panties online isn’t all fun and games. According to Mia, having an online fetish business is hard work. To supplement her revenue from underwear sales, she also cams with customers and sells more obscure fetish items like nail clippings, hair, and “pussy pops” (which I guess are like when you were a kid and poured orange juice into ice trays to make a refreshing summer treat, except different).

Although Mia herself does not have a panty fetish, she insists that her motivations for her business are not purely monetary, and she’s developed a number of personal relationships with her customers.

“A lot of the things that my customers buy are not things that I would ever consider buying myself, but the fact that I can provide a service for genuine, decent men who just have a fetish that may be considered odd is great for both myself and the customer, because I can keep them happy, and they help me out, financially!”

Sounds a lot better than cleaning toilets or scooping ice cream at Carvel (but probably just as messy).