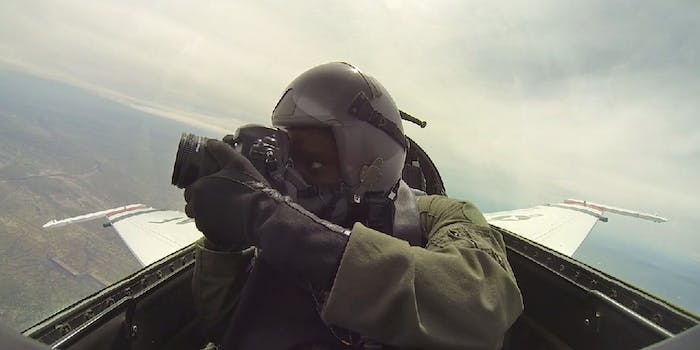 This photographer has the best seat on Earth for air shows

We have to watch from the ground. Sgt. Larry Reid Jr. doesn't have this problem.

Attending an air show—whether as a spectator or a bystander out in the neighborhood—is always a thrilling time. An unfortunate drawback, however, is our stationary perspective from the ground.

Guys like Sergeant Larry Reid Jr. don’t have this problem.

Sgt. Reid is an official photojournalist with the U.S. Air Force’s Thunderbirds squadron. Like the rest of us, he captures images of the sleek blue-and-gold jets screaming through the skies—but he gets to do so from the cockpit. As a result, those of us stuck on the ground can get a taste of what it is like to actually be in the pilot’s seat, navigating a supersonic machine and performing complicated maneuvers.

From Jet to Jet- Being the USAF Thunderbirds Official Photographer from Jaron Schneider on Vimeo.

Not even GoPro can match the breathtaking angles that Sgt. Reid manages to capture.