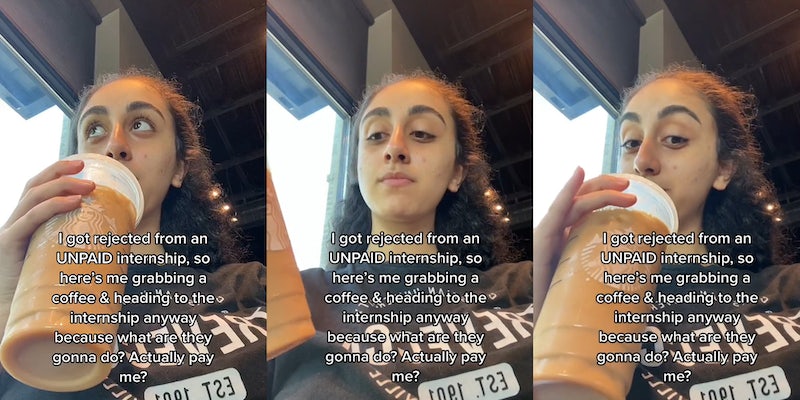 ‘What are they gonna do, actually pay me?’ Woman says she was rejected from unpaid internship—she showed up anyway

'I don’t get why places offering unpaid internships are so picky like we’re literally doing charity work for them.'

A young woman’s bold decision to show up to an unpaid internship she had not been hired for has drawn more than 291,000 views on TikTok.

In a now-deleted video posted by user Mariam (@maraooo1), she shows herself drinking Starbucks while making a face suggestive of having done something particularly daring. A text overlay on the video clues viewers in on the idea that she is on her way to an internship she had been rejected from.

“I got rejected from an unpaid internship, so here’s me grabbing a coffee and heading to the internship anyway because what are they (going to do)?” the text overlay reads. “Actually pay me?”

According to career data aggregator Zippia, nearly 40% of the 300,000 people who will work at internships each year are unpaid. While some may not be able to stomach the idea of working for free, it is not without benefit. Zippia data also shows those who have had internships and gained useful working experience are 15% less likely to be unemployed in the first few years after graduation.

Viewers criticized the fact that it was an unpaid internship, pointing to individual philosophies regarding work and employment.

“For real, I don’t get why places offering unpaid internships are so picky like we’re literally doing charity work for them,” one commenter wrote.

“Unpaid internships are criminal,” a second argued. “You’re better off!”

Others joked that forcing her way into the internship may have unintended consequences.

“Imagine getting forcibly removed from an unpaid internship,” one user said.

“*Gets police called on you for trespassing*,” another commented.

“Escort you off the property and possibly get you arrested for trespassing on private property,” a third wrote.

The Daily Dot has reached out to Mariam via email for comment regarding the video.