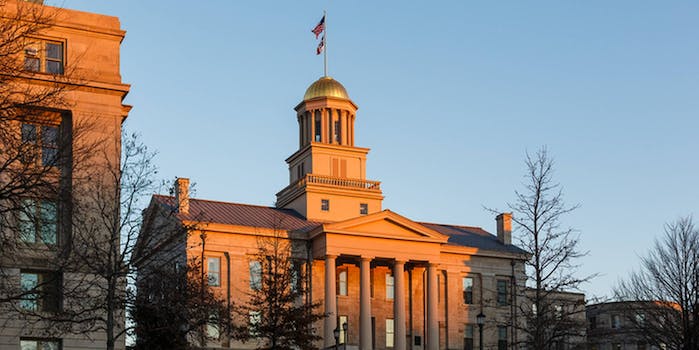 However, university officials admit there is 'fear' and 'distrust' on campus.

Earlier this month, University of Iowa student Marcus Owens claimed that he was attacked in a hate crime while leaving a bar in Iowa City. Days later, the hashtag #ExplainIowa began trending on Twitter, as students took to social media to demand a response from UI officials.

However, the Owens family has now issued a public apology, saying the attacks were not racially motivated:

Upon learning more details of the case, and while racial slurs served to fuel the violence, Marcus now knows that his account of events was inconsistent with police findings, in part due to alcohol being involved, his embarrassment at his behavior, as well as injuries he sustained. In light of this, it was concluded that this incident was not a hate crime as originally believed, but rather a case of excessive underage drinking and extremely poor judgment on the part of many people, Marcus included.

In response, the University of Iowa also issued a statement, which notes that despite the fact that the charges were false, the response from the community “highlighted a level of fear and distrust on our campus that must and will be addressed. Our students, faculty, and staff deserve to feel safe and supported, and that requires relationships built on trust and respect.”

The university also announced that it is launching a Bias Assessment and Response team to address bias on campus.

In a press release, Iowa City police gave a timeline of the incident, which concluded, “The original altercations stemmed from a disagreement between two students who are members of fraternities, the Pi Kappa Alpha and Kappa Sigma; however, this incident was described as an isolated incident between two subjects which began inside of Eden Lounge and continued outside. Owens was reported to have been a pledge member of the Pi Kappa Alpha fraternity.”

While police admit the “n word” was used in the attack, the FBI determined that it did not meet the criteria of a hate crime.

Police also noted that they will not be filing charges. While students have gone home for the summer, some responded on Twitter with a mixture of outrage and concern.

So we just destroyed Marcus Owens character and credibility for the rest of his life. Is that what's happening here? Swept under the rug?

Hopefully, conversations about race, safety, and distrust on campus won’t wait until the fall.