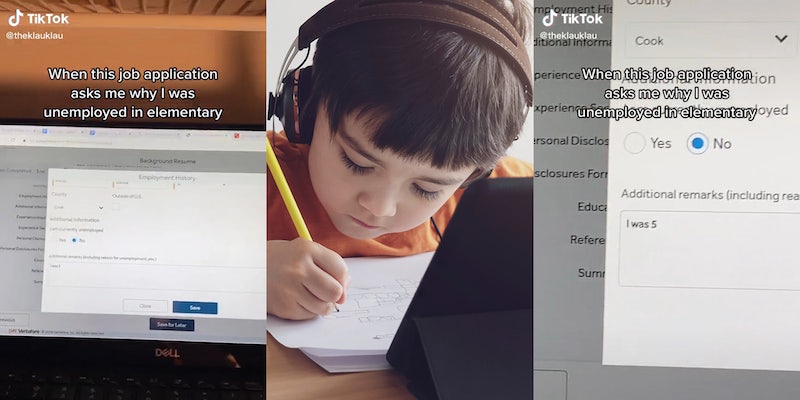 ‘What the absolute f*ck is going on in the workforce?’: Job application asks applicant why they were unemployed in elementary school

'I had somebody ask me why I was unemployed as a woman.'

A TikToker’s video showcases a digital job application asking for an explanation as to why they were unemployed as an elementary school student.

Posted by @theklauklau, the video shows the form asking for additional remarks regarding their unemployment. The time of “unemployment,” the TikToker claims, is when they were in elementary school. “I was 5,” the applicant wrote in the text box as their answer.

“When this job application asks me why I was unemployed in elementary school,” the text overlay reads.

“What the absolute fuck is going on in the workforce hello?” the TikToker question in the caption, adding a “#childlabor” hashtag.

Some viewers shared they were asked similar questions on forms. “I had to fill out a background check going back 14 years—I had to explain why my name wasn’t on a lease when I was 9,” one commenter wrote.

“My most recent job app asked for the last ten years of my professional history,” another commenter wrote. “I’m 22.”

“My application asked for my spouse’s Veteran status after I selected that I’m in High School and I selected the ‘I’m single option,'” a third wrote.

Others were simply asked for very specific information that didn’t quite make sense for a job application.

“I remember for a job app once i had to put all my previous home addresses and the exact move in and out dates,” one commenter wrote. “Why would I remember or know that.”

“I got asked to explain the employment gap from (year I started college) to (year I graduated) despite the fact that I had college jobs on the resume,” another commenter wrote.

“Indeed loves to ask why I was unemployed for three months when i was 17 like…I was just trying to graduate high school damn,” a commenter wrote.

The problems highlighted by commenters and @theklauklau are indicative of a larger issue when it comes to online job applications, with former Forbes opinion contributor Liz Ryan calling them “a waste of time.” “[Job applicants] complete forty to sixty applications for every job interview they get. That’s a terrible return on your time-and-energy investment,” Ryan claims.

Furthermore, according to a 2016 CareerBuilder study spotlighted by SHRM, over half of those who are looking for jobs online quit in the middle of filling out the application, citing the “length or complexity” of them.

Ryan instead urges job seekers to figure out who the person their manager would be at the job they’re interested in and directly reach out to them looking for opportunities.

Update Sept. 12, 3:28pm CT: Klauss Bautista-Arcé, the video poster, says he was applying for a job as a financial advisor and sales representative when he encountered the application. He said it asked for more specific information than any he had seen previously and followed an atypical structure as far as job applications go.

“The second section had about 10 subsections including the part where they asked about the last 10 years of employment history specifically including each address, zip code, date, etc,” Bautista-Arcé said. “They even asked the reason for leaving before the location of the employer. That’s what gave it all away for me.”

After submitting his application, Bautista-Arcé said he was only allowed to continue with the application once he had entered 10 years of employment history and that it took a total of six hours to complete.

“It was weird because the application didn’t let me continue onto the next section unless I had 10 years of history specifically and I’m 21,” he said. “Plus, I’ve never been asked this level of detail from an application before, and even my family was laughing at the questions I was asking because I even had to remember what elementary school I went to to explain the gaps, for example, for summer.”