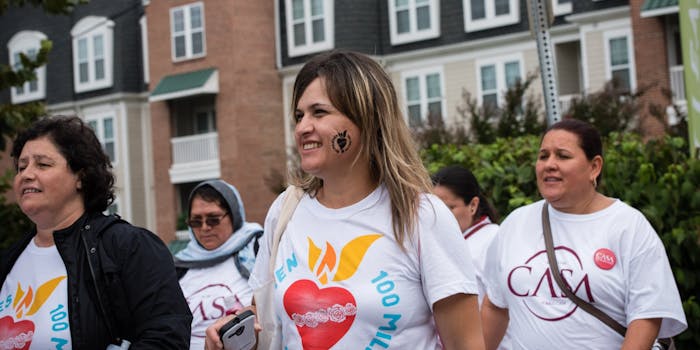 'There just continues to be a need for free and accessible trusted resources for immigrant women.'

Women’s rights campaign We Belong Together and the Immigration Advocates Network teamed up to release Step Forward, a new website that provides tools, resources, and information aiding undocumented women in understanding their options and rights.

“There just continues to be a need for free and accessible trusted resources for immigrant women. Step Forward builds on that,” We Belong Together Co-Chair Adriana Cristina Mercado told the Daily Dot.

The website, launched on International Women’s Day, aims to address the 5.2 million undocumented women living in the United States who may not be aware that they qualify for immigration relief. Many qualify for programs such as Deferred Action for Parents of Americans (DAPA) or those that aid crime victims or survivors of abuse.

It wasn’t uncommon for Mercado to see women’s lives transform in less than a year while working for organizations that helped undocumented women.

“It was at least every day women came to our doors with what they were experiencing and would learn that these programs exist,” Mercado said. “It was so moving to see several months and a year later them coming in to celebrate the fact they got their [program].”

Then-undocumented immigrant Adriana Carzola is an example of one the women who was entitled to rights she didn’t know she had as a person in an relationship with an abusive man.

“He told me that if I called the police for help he would report me to immigration,” Carzola wrote at Step Forward. “Every day that I left to go to work I was afraid that I wouldn’t be able to come home to my children. I didn’t know there were programs that could help women like me until I finally met a social worker who told me about [the Violence Against Women Act].”

The website says it will offer the following services:

“Our hope is to take the opportunity of International Women’s Day to recognize the contributions and leadership of women who are undocumented in the U.S., and overcoming the barriers they face in being able to live and work with dignity, respect, and legal protection,” Mercado said.

Photo via We Belong Together