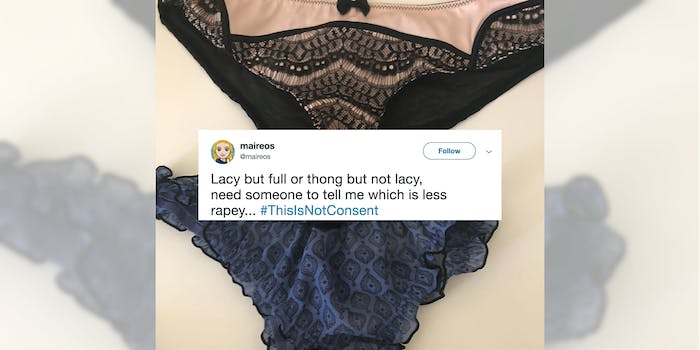 'Clothing is not consent.'

Women are sharing pictures of their underwear on Twitter after a thong was used as evidence of implied consent in a rape trial, according to CNN.

On Nov. 6, a jury in Cork, Ireland, found a 27-year-old man was found not guilty of raping a 17-year-old. Defense lawyer Elizabeth O’Connell’s final statement where she said the teenager may have been “attracted to the defendant” and “open to meeting someone” did not sit well with women.

“You have to look at the way she was dressed,” O’Connell said, according to the Irish Examiner. “She was wearing a thong with a lace front.”

People on Twitter were enraged at the claim that the teen gave implied consent with her choice of underwear. Women around the world started posting pictures of their own underwear on Twitter with hashtag #ThisIsNotConsent to point out wearing a thong doesn’t equate to consensual sex.

Lacy but full or thong but not lacy,
need someone to tell me which is less rapey… #ThisIsNotConsent pic.twitter.com/jiA61qF7gB

To bring a victims underwear into a rape trial as a reason for the rape is beyond despicable. #ThisIsNotConsent #IBelieveHer pic.twitter.com/wZPOqLEzLJ

Susan Dillon, who started the hashtag and is part of campaign group I Believe Her, told BuzzFeed News that “clothing is not consent.”

“This kind of victim blaming is archaic and had no place in our court system,” Dillon added.

Counsel for man acquitted of rape suggested jurors should reflect on underwear worn by the 17yo complainant. Following this wholly unacceptable comment, we are calling on our followers to post a picture of their thongs/knickers to support her with the hashtag #ThisIsNotConsent pic.twitter.com/ZkVU0GVAIN

People also participated in real-life protests in Dublin, shouting “clothes are not consent” and holding up signs to show solidarity.

Crowd is chanting that 'clothes are not #consent': the sense of solidarity, belief and conviction for change is palpable. #ThisIsNotConsent pic.twitter.com/HFNs1C3c2V