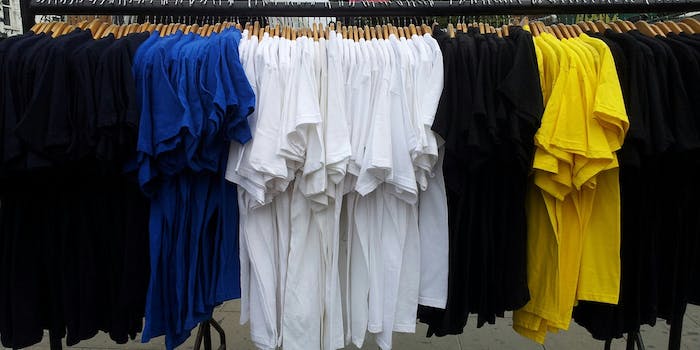 After backlash, Under Armour issues apology for ‘Band of Ballers’ shirt

They're going to make sure it 'doesn't happen again.'

Clothing company Under Armour has apologized for a T-shirt design that was deemed offensive to members of the military.

On Friday, the company faced pushback after complaints about a new men’s T-shirt flooded its Facebook page. The unfortunately named “Band of Ballers” shirt depicts what appear to be four men collectively holding up a basketball net. It bears a striking resemblance to a well-known image of soldiers raising a flag at Iwo Jima. People weren’t amused.

.@UnderArmour On behalf of my US Military brothers and sisters, reducing Iwo Jima to b-ball moment is UNACCEPTABLE.pic.twitter.com/hDbxnwwUG3

@UnderArmour Some things you just don't mess with. And the flag raising at Iwo Jima is no exception. That's a sacred image.

Under Armour has the utmost respect and admiration for active duty service men and women and veterans who have served our country. (1/3)

We have taken the necessary steps to remove this shirt, and any related shirts, from all retail and ensure this doesn't happen again. (3/3)

The shirt has apparently since been removed from the Under Armour site and Amazon, though it says it’s “sold out” on the UA site.