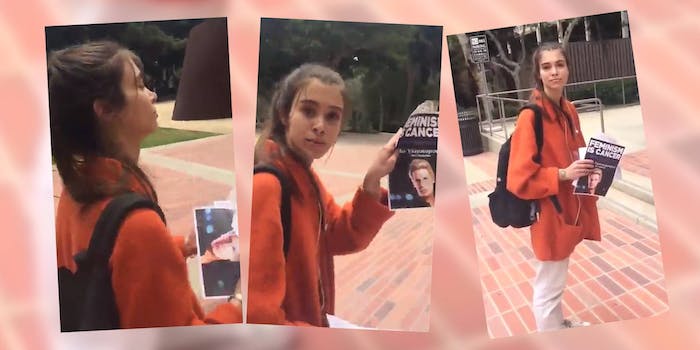 Do you really need to ask why?

UCLA’s Bruin Republicans club held an event called “Feminism is Cancer” on Tuesday, featuring lecturer Milo Yiannopoulous. He was scheduled to “provide a critique of third-wave feminism as it relates to topics including, but not limited to, free speech, the ‘gender wage gap,’ ‘rape culture,’ social justice, cultural authoritarianism, and the emerging phenomenon of safe space, microaggression, and trigger warning culture on college campuses.”

And one apparent female student had the perfect response.

In a video that appears to be shot by a sympathizer to Feminism is Cancer, a student walks through campus ripping down posters for the event, which features Yiannopoulous’s face. When asked why she’s doing it, she whips around, holds up the post and simply says, “This is why.”

No matter how much the woman recording the video yells at her for being “cancerous to society,” she keeps walking before finally turning and giving the most shade-filled look we’ve seen in a while.

The video was included in a compilation of protesters to the event posted by Yiannopoulous, in which he calls them “campus loonies” for daring to think that a movement aimed at gaining equal rights and respect for women is maybe not equivalent to cancer.

Protesters reportedly delayed the event by an hour, and despite his efforts, Yiannopoulous was unable to eradicate feminism.