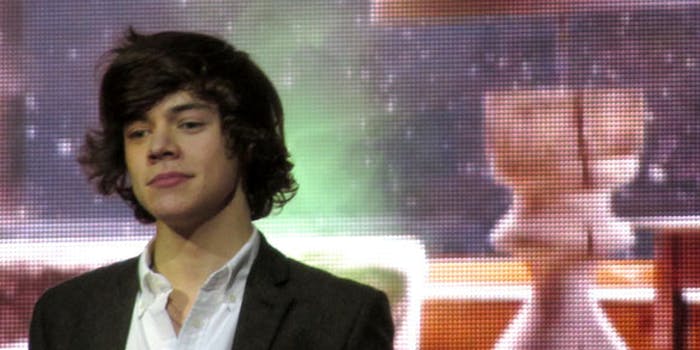 Kelcey Hallinan was diagnosed with Hodgkin's lymphoma around hte same time she became a massive One Direction fan.

A tweet from One Direction star Harry Styles made an ailing fan made so excited that hospital staff had to adjust her oxygen.

Kelcey Hallinan of Dunmore, Pa., was diagnosed with Hodgkin’s lymphoma—a form of cancer—in Dec. 2011. Around the same time, the 18-year-old and some of her friends became massive fans of boy band One Direction and, in particular, singer Styles.

The Make-A-Wish Foundation granted Hallinan’s request to meet Styles, but she has not been well enough to see him.

On Friday, four of Hallinan’s close friends visited her at a Philadelphia hospital, where she was taken earlier in the week. Well aware of the teen’s love for Styles, they started a campaign to cheer her up by getting him to tweet at her. They’d apparently tried to catch his attention for her birthday in December as well, but to no avail.

This time, fans of the group retweeted Hallinan’s friends and used the hashtag #HarryTweetKelcey en masse. Katie Couric was among the celebrities who retweeted the hashtag.

“It was really amazing because I would get a notification every minute. I would get a bunch of them,” Hallinan’s friend Sarah Jeffers told Eyewitness News. “You would see people re-tweeting and favoriting.”

Hi @kelceyhal it’s nice to ‘meet’ you. I’m thinking about you.. And sending you all my love. H .xx

Yet Styles wasn’t finished. He followed her on Twitter (as did tens of thousands of Directioners) and called Hallinan at her hospital room Monday.

Directioners often receive negative press. Just this weekend, some attacked a pro soccer player with death threats after he accidentally injured 1D member Louis Tomlinson in a charity game. Yet the fandom is frequently a force for good, as their willingness to help an ailing fellow fan hear from her idol showed.