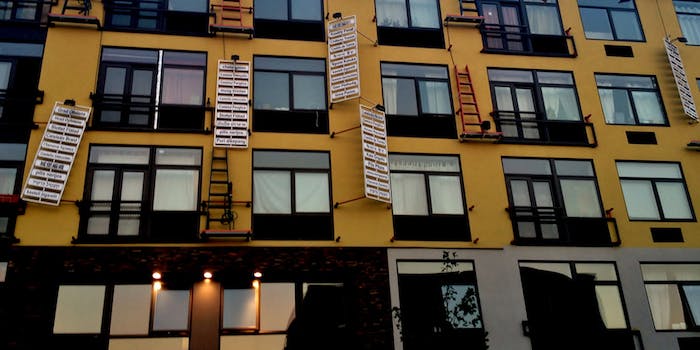 Is this Brooklyn hipster condo being trolled on Twitter?

If this guy is trolling, he's done his homework.

This week it appeared that things were heating up for the Twitter account @CastleBraid, ostensibly maintained by management-sympathetic residents of a Bushwick condominium complex with that name. But we have a feeling it’s all an elaborate gag—or a stream of consciousness belonging to one very paranoid person with a lot of time on his hands.

Much of the recent drama, the Village Voice reported, stemmed from a running feud with Occupy Bushwick, an activist group that has criticized Castle Braid for failing to provide affordable housing in return for “a generous tax abatement that required them to do just that.”

In addition to pointing out a dubious legal technicality in the matter, whoever is running @CastleBraid had a tautological rebuttal to that:

Clearly people can afford to live in our housing, so it is clear that our housing is affordable.

Affordable, that is, to whoever can pay $1,700 a month, the starting price for a one-bedroom apartment, which in Occupy Bushwick’s opinion means trust-funded, credit-card-waving, barely-post-collegiate gentrifiers. And yet the voice of the @CastleBraid seems to issue from a knowingly conservative lifetime New Yorker who remembers the “bad old days” before Rudolph Giuliani and Michael Bloomberg wiped out street thuggery as we knew it.

The feed manages to blame current problems on a mayor who has not even assumed office and achieves a transcendent smugness about the building’s nominal status as an enclave for the creative class—complete with a screening room, “chill space,” and digital media lab, just the sort of premium amenities your average struggling rich artist can’t do without. 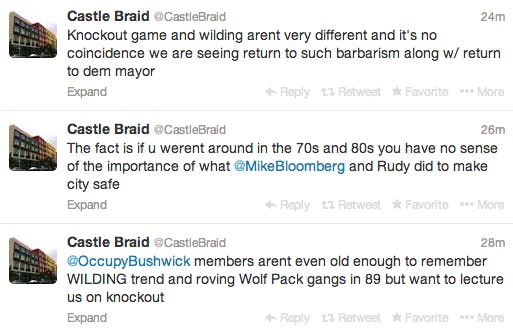 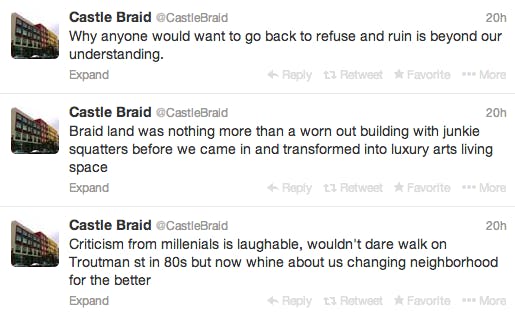 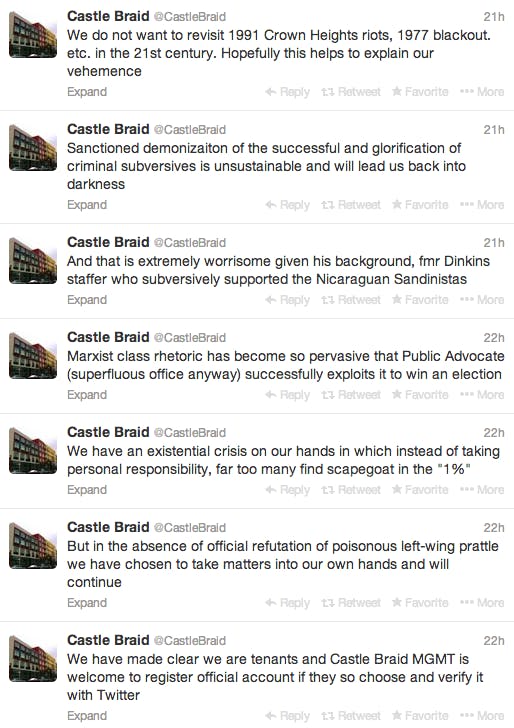 Today @CastleBraid was so busy stirring up racially charged moral panic, and posting so frequently, that they often couldn’t stop to proofread their manic far-right outbursts, which took on the character of a sloppy shotgun blast. Someone has really gone off the deep end here.

All we really know about the account is that it’s not run by a bot and probably not by management, who would presumably know better: “We share development goals and politics of MGMT and know them personally,” they told the Voice, choosing to remain anonymous. Something smells fishy, though, as a pair of tweets singled out by Brooklyn Magazine look to be the work of a master troll.

Sick of all the poverty in this neighborhood! Wouldn’t it be a great thing if #Bushwick looked more like @CastleBraid?

Too many of our artists getting sad when they see struggling families near @castlebraid. It’s distracting from their work and needs to end.

Could these really be genuine opinions, shared by two or more people? Mockery of the tone-deaf wealthy from an Occupy Bushwick mole? Just a  malicious prank carried out by a rival building owner? Who cares—just buckle in and enjoy the insanity.