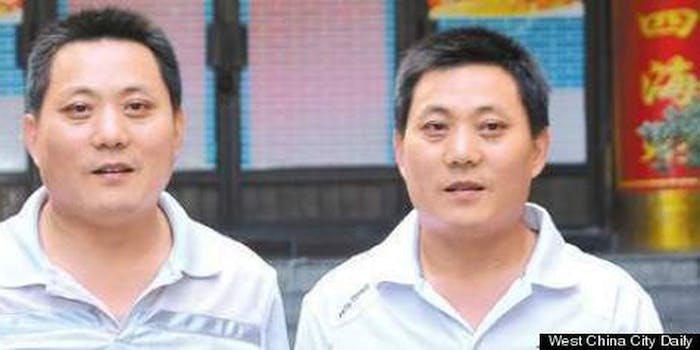 Zeng Yong was reunited with his long lost twin after a chance encounter 125 miles away from his hometown.

The story of twin Chinese brothers reunited by a chance encounter has gone viral on the Chinese social networking site Sina Weibo. It’s an inspiring tale of coincidence and family spanning four decades. After a friend of Chengdu resident Zeng Yong randomly spotted a man who looked just his buddy, Yong set out on a 125 trip to meet him. The man’s name was Liu Yonggang, and after talking for a while, the pair shortly realized they weren’t just doppelgangers—they were actual twins.

Yong’s and Yonggang’s 74-year-old mother gave the boys away 41 years ago because she couldn’t afford to take care of them. So they also tracked her down, this time in another city, Jianning, more than 1,000 miles away, according to the Huffington Post.

The incredible story of the twin’s reunion went viral on China’s biggest social media site Sina Weibo. Most commenters aren’t casting judgment on the mother, saying she probably had no choice. They’re just thrilled the family has been reunited after all this time.

People nowadays can’t understand the helplessness of parents in that era of poverty. Keeping children at home meant leaving them to die of starvation … I hope they are both happy. (Translation via the Huffington Post.)