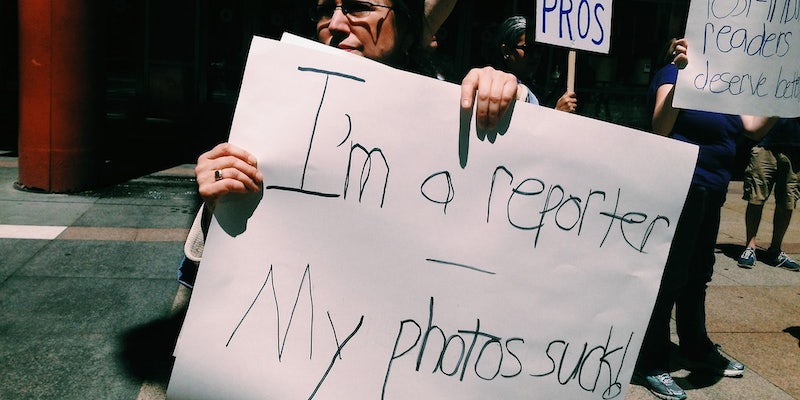 "Sun Times/Dark Times" compares the Sun-Times and its competitor, the Tribune, since 28 photojournalists were laid off.

Just over a month after the Chicago Sun-Times laid off its entire photography department, the newspaper’s new policy of letting reporters use smartphones to take photos on their beats has turned into a regular series of embarrassments.

The paper’s crown jewel, 68-year-old Pulitzer recipient John H. White, chastized it for “deleting a whole culture.” The competing Chicago Tribune is snapping up its fired photographers for freelance assignments. The Chicago Newspaper Guild is asking the National Labor Relations board to rule that the layoffs were a bargain in bad faith. Dozens of protesters picketed the building.

And most ironically, Internet culture—the same culture that the company was trying to tap into when it fired 28 people at once in favor of an emphasis on videos and phone pics—has thrown the Sun-Times to the wolves. Side by side comparisons of the Sun-Times and the Tribune have floated across the web daily since the layoffs, highlighting what many people feel is the paper’s swift and inevitable demise. And one Tumblr, “Sun Times/Dark Times,” is cataloguing the differences between the rival papers with a rigorous, straightforward despair.

Even outside of the Tumblr, the contrasts are striking: The Tribune maintains its full-time photography staff as well as a gorgeous photo blog, while the Sun-Times photo gallery now consists almost entirely of Associated Press and other wire photos, even for local coverage, with the last few photo sets from great Chicago photographers like White and Al Podgorski lingering on the second page, dated from April.

But when the Sun Times/Dark Times Tumblr, without commentary, places the Sun-Times’ online layout next to the Tribune‘s, a visual illustration of what the former has lost along with its professional photography staff quickly leaps out at the viewer. It’s not only that the uniformity of photos taken with an iPhone make the pages look bland, or that the inability to adjust things like lens focus, aperture, and shutter speed, as you can with professional photography equipment, make for more mediocre photo quality. It’s not even that the Sun-Times appears to have reduced the number photos displayed along with each article, often opting to show video instead.

It’s that the true photographer knows when to snap a picture, and more importantly, what kind of picture equals a thousand words. No video recap of a shooting, for example, can capture the moment or the emotion that the Tribune‘s John J. Kim does in a single photo of a man putting flowers on a mailbox after a triple homicide in his neighborhood. 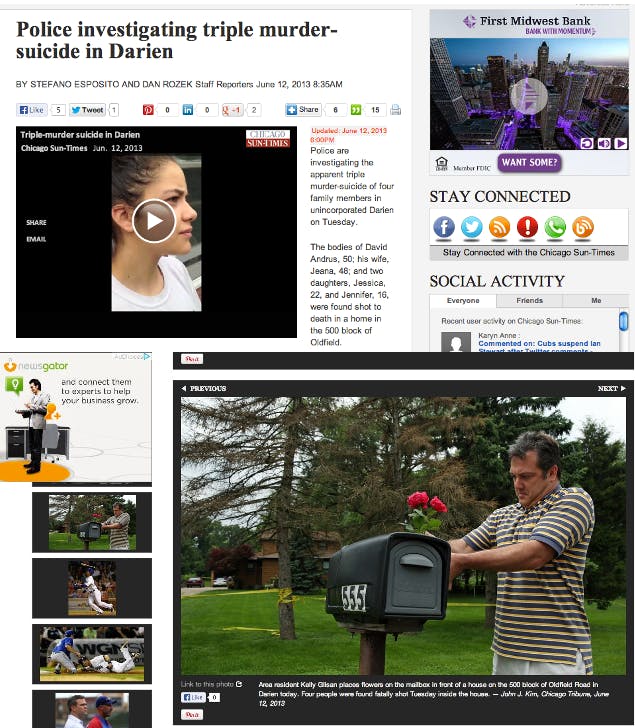 Screengrabs via the Sun-Times (top) and the Tribune (bottom)

Kim, by the way, won a Pulitzer Prize in 2011—while writing for the Chicago Sun-Times.  He left the paper last fall to work for the Tribune, and we can only assume he’s thanking his lucky stars, especially when he sees his new employer alongside things like this: 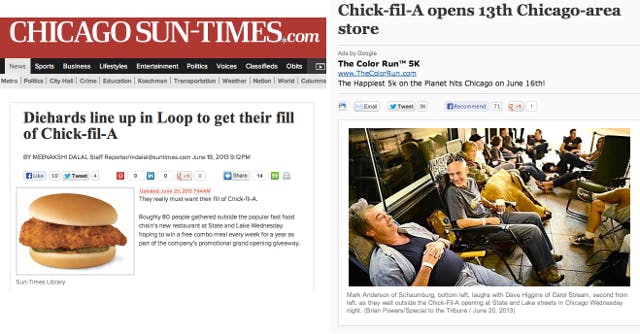 That’s the two papers covering the opening of a local Chick-fil-A. The Tribune chooses to focus on the people waiting in line outside; the Sun-Times can only offer a stock photo of a sandwich.

While one could argue that the opening of a Chick-fil-A hardly deserves more, there’s a basic appeal in the warm yellows and happy faces of the Tribune‘s coverage that makes you instantly see Chicagoland’s 13th Chick-fil-A, not as a cold corporate expansion, but as an emblem of a changing and evolving definition of community—the essence of good journalism.

There are times, too, when a good photo is entirely necessary to the article:

And other times when the Sun-Times achieves sadly hilarious results all by itself, like when it briefly uploaded an iPhone photo without rotating it, tried to include video players in its print edition, and snuck photos from 2010 into a current events gallery. The last picture comes to the Tumblr via Rob Hart, a photojournalist who was one of the 28 laid off in May. Hart has been keeping up with his own efforts to roll with the times via a Tumblr called Laid Off from the Sun-Times.

Since he was replaced by crappy iPhone pics, Hart has been documenting his life with his own iPhone, both with and without stylish filters. The fascinating, often beautiful results serve to remind readers that it’s not the expensive equipment that makes a difference to the Sun-Times reporting, but rather the professional experience and innate talent that goes behind the camera.

At least that’s how the creator of Sun-Times/Dark Times seems to feel. After a side-by-side of the Chicago Blackhawks’ Stanley Cup win went viral, they posted a brief note remarking on the landslide of media attention they were suddenly receiving:

I’m totally blown away by the response this tumblr has garnered in such a short amount of time, and it’s amazing to see how many people still care about visual journalism.

However, I just want to take a moment to point out that this isn’t about saying “oh, look how much the reporters suck.” This is about reporters and photographers both being necessary parts of a newsroom. The results would be just as ridiculous if the writers were laid off and the photographers had to write the stories.

Basically, we have to work together if we want quality journalism.

The Sun-Times hasn’t rehired any of its former staff, though it’s allegedly keeping them on as “freelancers.” But as the Tumblr’s creator noted, they do appear to be “stepping up their game,” and the Times’ coverage often looks perfectly respectable and professionally done.

And it’s also hard to miss the irony of a blog lamenting the demise of print journalism, using one of the very social media platforms whose easy image sharing and proliferation is most directly responsible for leaving professional journalists without careers.

Still, Tumblr can’t do what a newspaper of record does. And ultimately, as a Dark Times reader notes, it’s not the video footage or the killer ledes that we keep in our cultural memories: it’s the singular striking visual, the iconic moment captured forever in a photograph:

Who knows, maybe the Sun-Times reporters were able to weave magical, Pulitzer-calibre narratives of the days’ events as they wielded their iPhones; but five years from now who’s going to remember their lede, the pithy quote in the middle. That photo of the cup being hosted amidst a rainstorm of confetti in front of tens of thousands of adoring fans as far as the eye could see against a backdrop of Chicago’s skyline will live in memories for a long time.

All photos via Sun-Times/Dark Times