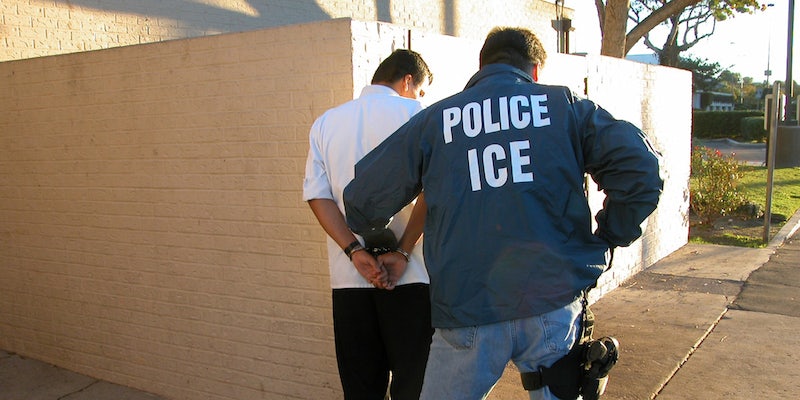 Did President Donald Trump initiate a “crackdown” on undocumented immigrants over the past week, or are the actions of U.S. immigration officers just routine enforcement?

The New York Times reported on Sunday that the answer to that question remains “unclear,” citing what appear to be conflicting statements from Trump and the Immigration and Customs Enforcement (ICE), the law enforcement agency that operates under the umbrella of the Department of Homeland Security.

In a tweet on Sunday, President Trump portrayed recent law enforcement activities—the detentions of more than 680 people in as many as 11 states last week, according to DHS—as a “crackdown on illegal criminals” in keeping with a “campaign promise.”

The crackdown on illegal criminals is merely the keeping of my campaign promise. Gang members, drug dealers & others are being removed!

“Gang members, drug dealers & others are being removed!” the president exclaimed.

However, ICE, which as a matter of course does not comment on upcoming or future operations, has described the law enforcement action as “routine, targeted arrests carried out by ICE’s Fugitive Operations Teams on a daily basis.”

A spokesperson for ICE on Monday morning attributed the so-called “crackdown” to the natural “ebb and flow” of law enforcement operations. The agency had been developing leads and following up on intelligence reports, the official said, prior to launching its enforcement and removal operation. (“Removal” is the term ICE uses to describe forced deportations.)

“ICE does not set up checkpoints. That’s simply not true.”

The official pointed to an operation that took place last July in which 100 men and 12 women were taken into custody in the greater Los Angeles area alone. A month before, ICE arrested 331 individuals during a monthlong operation in six Midwestern states. Back in 2012, ICE carried out a six-day national enforcement operation that led to the arrests of more than 3,100, whom the agency described as “convicted criminal aliens, immigration fugitives, and immigration violators.”

Former President Barack Obama, it should be noted, was himself a prolific deporter, sending more than 409,000 undocumented immigrants back to their countries of origin in 2012. While insisting the focus remained on those with criminal convictions, or foreigners who posed national security threats, the Obama administration routinely rounded up and deported what the Times termed “low-priority immigrants.”

The ICE official also expressed some frustration with what they called “false reports” online, such as rumors that ICE had shut down a mall, or was in the process of establishing interior checkpoints. The agency painted such reports as irresponsible, citing the potential to create mass panic within communities.

“ICE does not set up checkpoints,” the spokesperson said. “That’s simply not true.”

ICE reports that it conducted 240,255 removals last year. Of those, 58 percent had prior criminal convictions—though the statistics do not elaborate about the severity of those crimes. Among those without prior convictions, however, approximately 95 percent were detained at or near the border or a port of entry.

Around 5,000 people who had no criminal record were removed from the country last year while not at or near the border, ICE says.