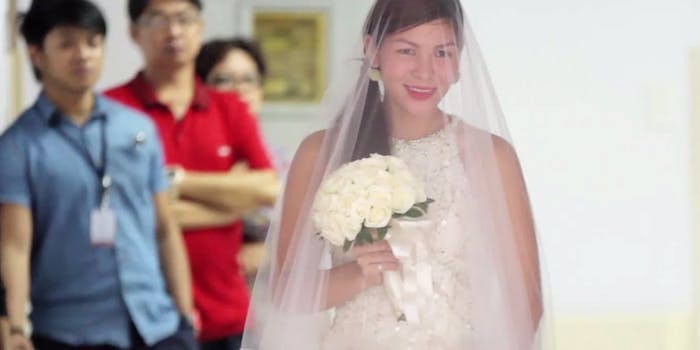 Dying man marries his true love 10 hours before passing away

This is the saddest, most romantic thing on the Internet.

Rowden Go Pangcoga and Leizl Pangcoga got married on June 11, 2014. 10 hours later, the groom passed away.

The couple originally planned to get married on July 8, the groom’s 30th birthday, then cancer struck. Pangcogo was diagnosed with stage IV liver cancer in early May, his last wish was to marry Leizi, the love of his life. Too sick to leave the hospital, the hospital staff brought the wedding to Pangcoga’s bed-side.

Footage of the wedding preparation and ceremony hit the web on June 18, and it is heart breaking. The three-minute video features the bride getting ready, the tears of Pangcoga’s mother Lorelei, and the smiling face of the couple’s two-year-old daughter Zakiah Rowzel acting as the flower girl.

Watch the video below. Keep the tissues handy.