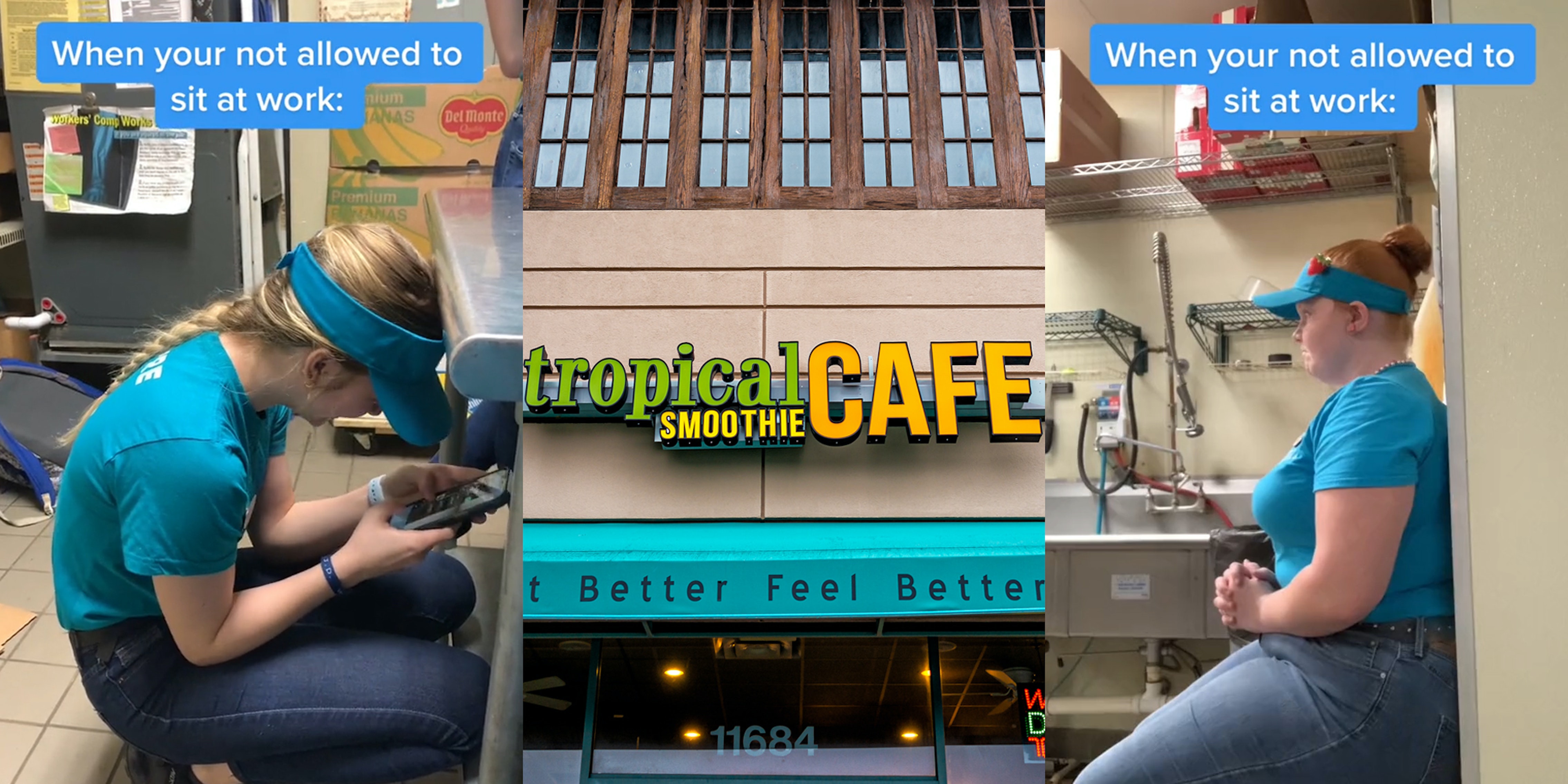 ‘No chairs in sight’: Tropical Smoothie Cafe workers show how they rest their legs—because they can’t sit

'This should be illegal.'

A viral TikTok video from a pair of Tropical Smoothie Cafe employees shows the relatable experience many fast food workers undergo when management won’t allow them to sit during their shifts.

The video, posted by user @shutyournuggets, shows multiple workers at the fast food chain finding ways to rest their legs without sitting down. The workers are seen squatting, leaning against walls, balancing on one leg to give the other one a break, and leaning down over a store counter.

“No chairs in sight,” the video’s caption reads. It seems that the smoothie cafe, like many fast food restaurants, doesn’t allow its employees to sit down while on the clock.

Other former and current Tropical Smoothie Cafe employees commented that they’d had similar experiences while working at the chain.

“Tropical was the best and worst job i’ve ever had,” one viewer commented.

“Genuinely [sic] don’t know how i made it at tropical,” another wrote.

Some commenters said the chain’s employees, along with other fast food workers, don’t get paid enough to work a shift without sitting.

“For $10 an hour idk why people still listen to ANY commands [laughing emoji],” one viewer commented.

Other users said they would use every excuse to take a bathroom break just to be able to sit down. Some expressed confusion at the common “no sitting” rule found in many chain restaurants.

“I don’t understand the no sitting rules, what’s with the belief we can’t be productive sitting,” one user asked.

“Sitting down is reasonable accommodation,” a second user wrote.

A third commented, “this should be illegal.”

While many fast-food chains don’t provide seating for their employees, some states have passed legislation on the issue. In California, employers cannot refuse their workers a place to sit due to a preference that they stand, and other factors must be taken into account. The state’s supreme court made the decision following a class action lawsuit from workers at CVS and JP Morgan Chase Bank who faced workplace injuries due to prolonged standing, per GEKLAW.

The Daily Dot reached out to the creator via TikTok comment and to Tropical Smoothie via email.