Students with gay parents, siblings, or relatives are not allowed.

To apply to Trinity Academy in Wichita, Kansas, students must sign an anti-LGBT policy, according to one alumni. The document titled “Statement of Understanding and Agreement for Parent and Student” says that the private Christian school has the right to deny admission to a student who has a gay parent, sibling, or relative at home. It reads in full:

Given the debate and confusion in our society about marriage and human sexuality it is vital that Trinity families agree with and support the school’s traditional, Christian understanding of those issues. Therefore, when the atmosphere or conduct within a particular home is counter to the school’s understanding of a biblical lifestyle, including the practice or promotion of the LGBT (lesbian, gay, bisexual, transgender) lifestyle or alternative gender identity, the school should have the right, in its sole discretion, to deny the admission of an applicant or discontinue enrollment of a current student. 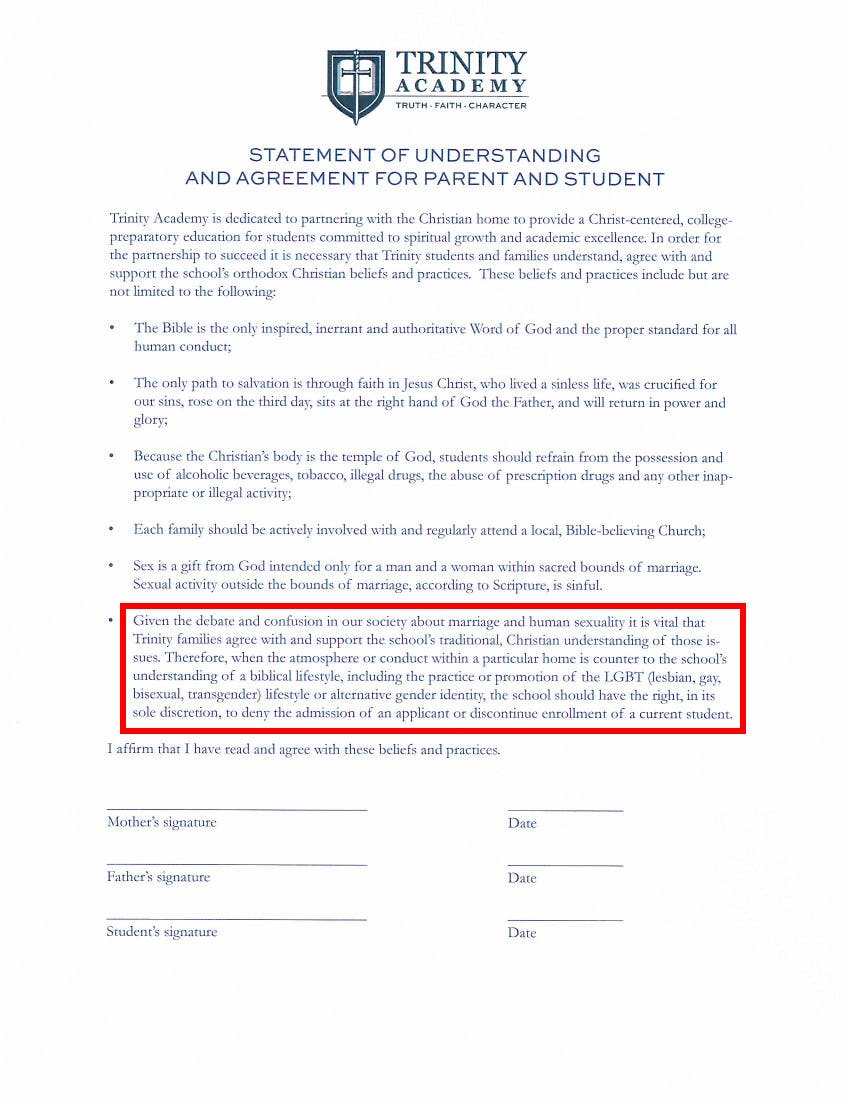 Photo via The Friendly Atheist

Morgan Douglas Faulkner, a 2013 graduate of Trinity Academy, initially leaked the document anonymously to the site The Friendly Atheist last week. But he has since come forward to clarify his intentions on Twitter, posting an email, which encourages Trinity board members and educators to reflect on Trinity’s motto, “Truth. Character. Faith.”

In an email to the Daily Dot, Faulkner noted that response to the leak has been positive. “It is refreshing to see the tide turning in favor of the LGBT community (especially in Kansas).”

However he did add that the response from the Trinity community itself has been more mixed, calling the network of Trinity families a “Christian mafia.”

Trinity is comprised of some of the most powerful families in Wichita—essentially a Christian mafia—and some of them have claimed that they feel attacked or threatened by what I’m doing. They claim to fear for themselves, for their children, and for their businesses. My counterpoint is to imagine what a closeted LGBT student at Trinity is feeling as they endure the brainwashing, shaming, and emotional abuse at the hands of the people who claim to be helping them on their path to adulthood.

Trinity Academy did not answer phone calls from the Daily Dot and its website has since gone into “maintenance mode” and appears blank. A Wichita NBC affiliate, KFOR, reported that, in a press release, the school denied ever refusing admission to a gay student or a student with a gay sibling.

“We do not condone sexual activity of any kind for our students whether heterosexual or homosexual,” said the release. “Again, Trinity’s whole intent is to make sure families know what we believe so we can partner together successfully for the good of the students.”

In his email posted to Twitter, Faulkner addressed LGBT members of the Trinity community, stating, “We want to help you find the peace that may be eluding you, and we have created a hashtag (#TrinityInsurgency) to raise awareness about these issues. Not just for Trinity students and alumni, but for individuals all over the country and the globe who find themselves in a similar position.”