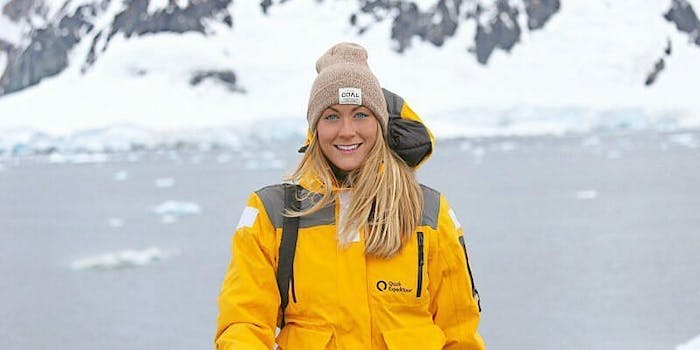 Take it from a traveling pro.

When you’re overwhelmed by the obligations of work or school, wanderlust can feel impossible to shake. But if you follow these tips from Cassie De Pecol, the first woman and the fastest person to visit every single country, your travel goals might be sooner attainable than you think.

On March 21, De Pecol spoke with Money during a Facebook Live segment and discussed her Guinness World Records-breaking success, as well as the financial difficulties she faced during her 18-month journey.

De Pecol told Money that she began the financial leg of her trip by saving $10,000 from two babysitting gigs, and channelled methods of professional athletes by targeting investors and getting herself a sponsorship to fund her travels.

“I pretty much had to give up my social life. No going out, no going out for lunches or anything,” De Pecol said.

Despite her savings and sponsorship, De Pecol ran out of money less than halfway through her journey. But like any other millennial whose bank account has shamefully run dry, De Pecol returned home for two weeks without telling a soul and quickly fundraised the rest of her trip.

When she left for the second attempt, she buckled down on to finances by keeping an Excel spreadsheet and sticking with a weekly budget to avoid having to take the embarrassing detour again.

“I’m not a money person,” De Pecol admitted. “I’ve never been great at keeping up with my finances, but on this trip, I really learned to have to do that because I was the only one that was in control of it. It was up to me whether I failed or succeeded.”

De Pecol told aspiring travelers to save a portion of their paychecks and stick to said budget, but also to give themselves some financial room in order to take advantage of unexpected opportunities. The holder of two Guinness World Records is even starting her own non-profit to help people fund their passion projects, too.

“It’s really important to save 10% of every paycheck,” De Pecol said. “It’s important to have a cushion with money. I mean I’ve had nothing, and it’s a really terrible situation to not even be able to afford a meal when you’re hungry.”