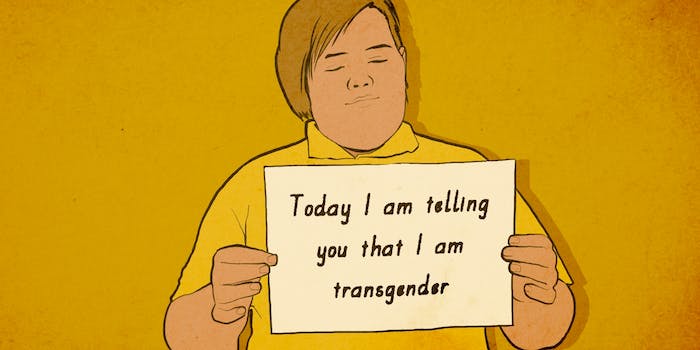 11-year-old comes out as transgender in viral video

She says the school has been supportive.

Abbey Boon is only 11, but she made a statement on July 1 that has been shared around the world.

The Australian primary school student came out as transgender online in a video that has been watched and reposted thousands of times. In the video, originally posted by her mom Melinda Miles, Abbey holds up a series of cards that explain the transition.

“Today I want to share my secret with you,” reads the first card, followed by cards that explain how she has felt like a girl her whole life.

At the end, she shares, “Today we are saying goodbye to that boy Ethan,” before appearing in a blouse with a card that reads, “This is the real me.”

The girl’s mother told local news site TEN Eyewitness News that Abbey was at first assumed to be gay.

“We accepted that,” Melinda Miles told TEN, “but she came up to me late last year and she goes ‘I don’t want to be a boy, I want to be a girl.'”

Miles said that Abbey’s school has been supportive, helping to connect the family with a local LGBT organization.