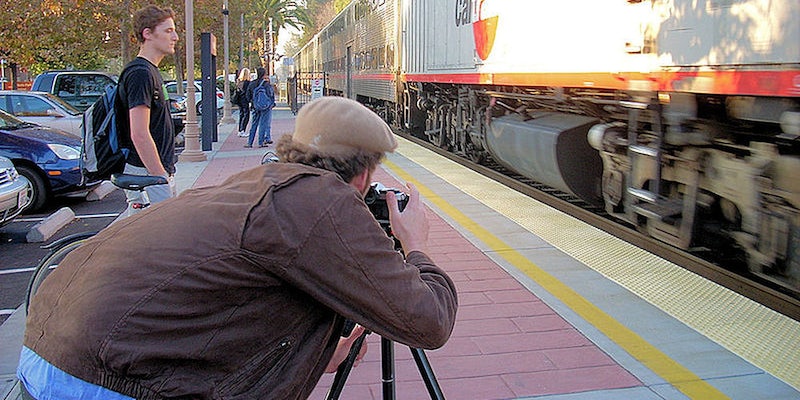 This photographer is YouTube-shaming cops until they stop harassing him

“They were trying to intimidate me."

Joe Hinson takes pictures of trains. It’s a hobby that has taken the South Carolina man all across the country. On July 16, he was doing just that along the tracks of the South Carolina Central Railroad, but the shoot was interrupted when he was pulled over by a deputy from the Darlington County Sheriff’s Office. The reason? Railroad workers were suspicious of the man with a camera on public property.

Now, Hinson has uploaded YouTube videos of three separate instances when police or railroad officials hassled him for doing something completely legal.

“I feel like they were trying to intimidate me into not doing what I was doing, which is taking train photographs from public property,” Hinson told the Daily Dot.

In recent years, train enthusiasts and railfans have often been harassed for perusing their hobby. In 2010, the editor of an enthusiast magazine was arrested in New York City after taking a photo of a subway. The arrest led to a lawsuit by the New York Civil Liberties Union defending the right of the public to take photos of trains.

Hinson said he feels fortunate that the incident in Darlington County didn’t go that far, but thought it was worrisome that police and workers tried to stop him.

It all started on July 16, when Hinson was following the South Carolina Central train on its daily run before he was pulled over. The officer checked Hinson’s identification and vehicle registration. After some questioning, Hinson was free to go.

But his ordeal wasn’t yet over. On July 17, while following the same train, two railroad employees verbally harassed Hinson. He again captured the entire eight minute exchange on video and uploaded it to YouTube. In it, the employees asked him to stop following the train and said he couldn’t take pictures of it, even though he was on public property. Employees said they were worried about the train’s sensitive cargo. Hinson explained that it was a common hobby and that he was within his right to take photos. After the exchange, a railroad employee followed Hinson until he was pulled over for a second time in two days. Again, railroad officials had called the police.

The officer questioned Hinson before letting him go. When he got home, he emailed someone at the railroad’s parent company, but then turned to YouTube.

“I posted the video to YouTube after not feeling like the person I had traded emails with (at) corporate fully appreciated the lengths the railroad crew had gone when they approached me,” he said.

The videos were quickly shared on social media, especially among train enthusiasts who have supported Hinson. One of the videos had nearly 1,000 views this week. Henson said he feels he did the right thing in trying to protect his rights and his hobby of taking pictures.

“Most of the response to the video has been nothing but positive,” he said. “I think a lot of folks feel like I feel, that people need to realize that photography is entirely legal on public property and that it in no way is a threat to anyone’s safety.”