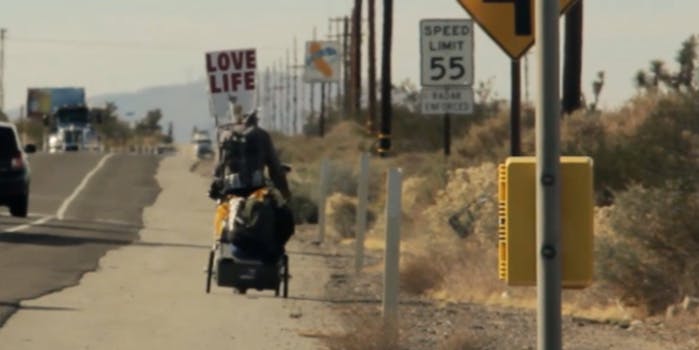 After tragedy, this man is walking across the country to inspire others

Steve Fugate's "trail therapy" has been quite the journey.

Over the last decade, 67-year-old Steve Fugate has walked across the country seven times. The first time, he started his journey from Florida, after the suicide of his son, Stevie. He attached a “Love Life” sign to his backpack, and began walking. Years later, as he was finishing a walk, he learned his daughter, who had MS, had suffered an accidental overdose. Once again, he took up his sign in her honor.

Filmmaker Cyrus Sutton encountered Fugate in the California desert the day after Christmas, and started filming, which resulted in a six-minute short called “Trail Therapy.” The title alludes to Fugate’s outlook on his decade-plus journey across the 48 states — it’s a therapeutic walk for himself and his children, and a way to raise awareness about suicide and depression. The people he encounters can choose to take something away from it, but maybe one of those encounters led someone to make a change in their life.

Fugate’s been keeping people updated via his website and Facebook page, and offering words of inspiration about his journey, during which he’s endured a range of elements, bobcats, and grizzly bears. He says Facebook’s a way for him to keep in touch with the world, but also to show people the random acts of kindness that happen to him “on a daily basis. Sometimes numerous times in one day.”

“There’s no such thing as world peace,” he adds in the short. “There’s only peace within.”

On his Facebook page today, Fugate offered an update:

“The most important tool we have for facing what is in front of us daily is the acceptance of our Life as it unfolds before us and to LOVE it for exactly what it is, a gift! You are breathing, and that means all things are possible.”